Accompanying the president was Foreign Secretary Marcelo Ebrard and his department’s top officials for relations with the US, as well as Mexico’s ambassador to the United States, Martha Barcena.


The congressional delegation was led by the chairman of the House Foreign Affairs Committee, Democrat Eliot Engel of New York, while John Creamer, the charge d’affaires at the US Embassy in Mexico City, sat in on the discussion 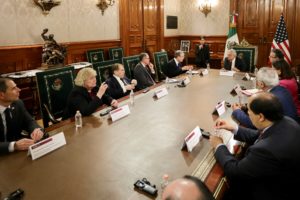 Lopez Obrador’s office did not disclose what was discussed.


The meeting came amid public disagreement between the two governments regarding immigration issues and a renewed threat from US President Donald Trump to close the shared border.


“If Mexico doesn’t immediately stop ALL illegal immigration coming into the United States through our Southern Border, I will be CLOSING the Border, or large sections of the Border, next week,” Trump said on Twitter last Friday.


The Mexican government was quick to respond.


“Mexico does not act on the basis of threats. We are a great neighbor. (Ask) the million and a half Americans who chose our country as their home, the largest community of (Americans) outside the US. For them we are also the best neighbor they could have,” Mexican Foreign Secretary Marcelo Ebrard wrote on Twitter.


Lopez Obrador said last Thursday that he expected his policies to lead to “full employment,” stemming the flow of Central American migrants to the United States who will prefer to stay in Mexico.


“I’m optimistic that there is going to be 100 percent employment, full employment. And that’s how we’ll be able to help. We can help to ease, reduce, the migratory flow from Central America toward the United States with employment,” Lopez Obrador said in response to a question about Trump’s complaints about the border.


Mexican officials warned recently that a “mother caravan” was being formed in Honduras with the intent of helping more than 20,000 people reach the United States.


In response to a question last week about that prospective caravan, Lopez Obrador said humanitarian and work visas would be offered to the Central Americans.


“It’s all voluntary, nothing is being done by force. Let them see that they can have options for work in our countries,” the president said.