Lima, Apr 2 (EFE).– Former Jamaican athlete Usain Bolt, the fastest man in the world since running 100 meters in 9.58 seconds and 200 meters in 19.19 seconds, did not even have to make an effort on Tuesday to win a short race against a motorcycle taxi in Lima, one of the most characteristic vehicles of Peruvian cities.

Although the race was only over 50 meters, Bolt proved to be far superior to the motorized vehicle, a covered tricycle with three seats for passengers behind the driver that can reach a top speed of 60 kilometers per hour. 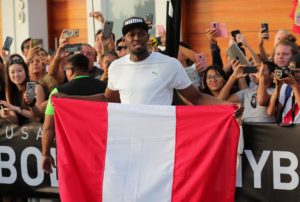 The sprinter left the mototaxi behind from the starting gun and dedicated himself to trotting around the rest of the improvised track painted on a street in the Miraflores district of Lima, with views of the Pacific Ocean, under the applause of the Peruvian public.

After the victory celebrations where he delighted the spectators with his already unmistakable lightning pose, the triple Olympic champion over the 100 and 200 meters drove the mototaxi back to the starting line.

The vehicle, driven by a motorbike driver from the populous Lima district of San Juan de Lurigancho, was decorated with flames and the name of Bolt on the front next to two feline eyes that allude to the sports brand which sponsors the Jamaican.

Bolt told the public smilingly that the race was too easy and that the mototaxi should have started with a ten minutes headstart, so that the duel had some excitement.

The Jamaican athlete is in Peru as part of a South America tour with his main sponsor and on Monday he met with Chilean President Sebastian Pinera in Santiago de Chile.

Bolt will have more commercial commitments in Lima on Wednesday, where he will also inaugurate the athletics track for the next Pan American Games in Lima 2019, which will take place between Jul. 24 and Aug. 11.

The fastest man in the world will be the first athlete to run on the Pan American track, located in the National Sports Village (VIDENA), where some American athletes who will then go on to the Olympic Games should shine in a few weeks.