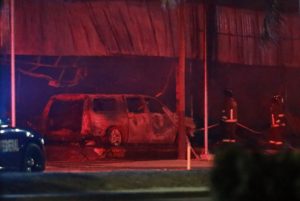 Media outlets reported that seven automobiles and two motorcycles were destroyed in the fire.

Capella said police found “a vehicle with the smell of gasoline, presumably used in the attack,” in an area near Planeta Car Cancun, which also leases vehicles and has a race track for go-karts.

The assailants presumably used the vehicle, a white SUV, in the attack.

The SUV was spotted leaving the scene minutes before the blast and was abandoned close to a luxury residential subdivision.
Police secured the crime scene and there is no danger for residents, the public safety secretary said.

Prior to the fire, residents had called the 911 emergency phone number to report a confrontation at the business.

Planeta Car Cancun employees said the assailants threw what appeared to be a grenade, setting several vehicles on fire, and fired several gunshots. 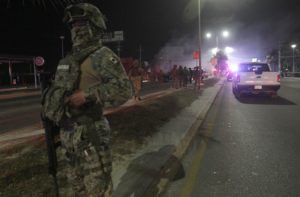 Firefighters arrived on the scene and put out the fire, while police officers patrolled the area and municipal traffic officers handled the flow of vehicles.

The motive for the attack remains unknown, but it is presumed that the owner was targeted by an organized crime group because he did not pay protection money as part of an extortion racket.

Since 2017, drug-related violence has plagued a large part of the southeastern state of Quintana Roo, which welcomes tens of thousands of tourists each year and generates huge amounts of hard currency for Mexico.

Officials blame the violence on a turf war involving the Jalisco Nueva Generacion Cartel, the Los Zetas cartel and other gangs that want to control the illegal drug trade in the region.

Cancun, Mexico’s most important Caribbean tourist destination, registered 550 murders in 2018. So far this year, more than 100 people have been killed in gangland hits.

Cancun was listed among the 50 most violent cities in the world by the Citizen Council for Public Safety and Criminal Justice (CCSPJP) in its 2018 rankings.