“We have decided on the intervention, restructuring and modernization of (state-owned utility) company Corpoelec, a restructuring that must be done hand in hand with its workers,” Rodriguez said in an address carried by the official VTV network.


Rodriguez said the electricity crisis was caused by a “criminal attack” by the opposition and the US government on the SEN that affected “infrastructure, transmission lines and power generation capacity.” 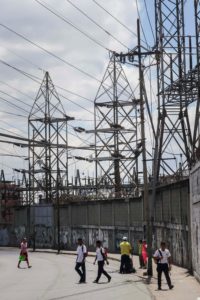 “There is no doubt about these acts of cyber sabotage,” the vice president said.


Rodriguez said the plan to address the power crisis, which began last month, called for “dealing with the national electric emergency caused by the criminal attack” and “the construction of a new system armored against these types of attacks.”


The administration, she said, created six work committees “to protect the SEN against such series of attacks” that will be part of the Electricity General Staff announced this week by Maduro.


Rodriguez said Corpoelec has been rationing electricity under a 30-day plan, which started on Sunday, “to progressively add load capacity to the electric system.”


The vice president blamed National Assembly Speaker Juan Guaido, who has been recognized as Venezuela’s interim president by more than 50 countries, for the outages, which continue primarily in the western states.


“Self-proclaimed (interim President Guaido) is asking for the people of Venezuela to be without electricity,” Rodriguez said, adding that the government would show “new evidence” about these allegations in the upcoming days.


Earlier in the day, Maduro reported in a Twitter post the gradual restoration of water and electric service “despite the attacks against” the SEN.


On Monday, Maduro fired Electric Energy Minister Gen. Luis Motta Dominguez and replaced him with Igor Gavidia, an electrical engineer with 25 years of experience in the industry who will also serve as chairman of Corpoelec.


Maduro created the Executive Secretariat of the Electricity General Staff, which will be under Interior and Justice Minister Nestor Reverol.
On Sunday, protests broke out in Caracas as residents woke to yet another blackout that affected several regions.


The latest power outages come nearly a month after the massive blackout that Venezuela experienced on March 7 that kept virtually the whole country in the dark for five days until the government managed to regain control of the situation and restore electric service.


The government said at the time that sabotage at the Guri hydroelectric complex was to blame for the blackout.
Maduro directly blamed the United States and the opposition for the alleged sabotage, claiming that “electromagnetic” attacks had been staged on the electric grid.


The opposition, however, blamed the Maduro regime for failures in the system, saying that the government’s poor management of the grid was the real cause of the outage.


The early March blackout caused about 15 deaths due to the lack of electricity at Venezuelan hospitals, the opposition claims, while officials contend that just two people died.