Washington, Apr 3 (EFE).- NATO Secretary General Jens Stoltenberg on Wednesday praised the historic role of the United States within the North Atlantic alliance and pressured Russia to abide by the INF missile treaty in a speech to both chambers of Congress.


“America has been the backbone of our alliance,” Stoltenberg told the 435 members of the House of Representatives, the 100 US senators and top members of the US government.


The Norwegian official began his address by quoting former US President Harry Truman, who governed from 1945-1953 and was one of the signatories of the founding of NATO on April 4, 1949.


“Our alliance has not lasted for 70 years out of a sense of nostalgia or of sentiment,” he said. “NATO lasts because it is in the national interest of each and every one of our countries.” 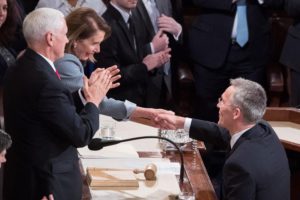 “Open discussions and different views is not a sign of weakness,” Stoltenberg said. “It is a sign of strength. So we should not be surprised when we see differences between our countries. Today there are disagreements on issues such as trade, energy, climate change and the Iran nuclear deal. These are serious issues with serious disagreements.”


Stoltenberg also thanked President Donald Trump for his insistence that all members of the alliance increase their military spending.


The Norwegian said that the NATO allies must spend more on defense, adding that “This has been the clear message from President Trump and this message is having a real impact,” a remark that received loud applause from the Republican side of the aisle and the members of Trump’s Cabinet.


This was the first time that the head of an international organization had addressed both chambers of Congress in joint session, according to what US Ambassador to NATO Kay Bailey Hutchinson told reporters on Tuesday.


In his speech, Stoltenberg said that Moscow must respect the Intermediate-Range Nuclear Forces Treaty (INF), which will expire on Aug. 2 in the wake of the announced US withdrawal because of Moscow’s noncompliance with the pact.


He said that NATO’s stance on the issue is united and clear and that he has continued to ask Russia to return to compliance with the INF but so far it has made no moves to do so. He said there are no new US missiles in Europe but there are new Russian ones. 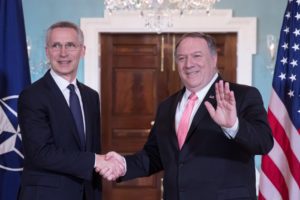 
According to NATO, Russia continues to violate the INF treaty by developing and deploying SSC-8 missiles, which are difficult to detect and lower the threshold for the use of nuclear weapons.


However, Stoltenberg said that his aim is not to “isolate” Moscow but rather to increase efforts “for a better relationship” with the Kremlin.


On the other hand, he said that NATO forces remain in Afghanistan to fight terrorism, train Afghan troops and pave the way toward Afghan reconciliation, not to create a permanent fighting force on the ground.


The NATO chief’s address to Congress comes one day after he met with Trump at the White House, an encounter during which the US leader once again urged the European members of NATO, especially Germany, to increase their defense spending.


The NATO ministerial meeting, which Stoltenberg is in Washington to attend and which is being held on Wednesday and Thursday, is symbolically significant because it coincides with the 70th anniversary of the signing of the Washington Treaty that established the alliance.