SAN JOSE, Calif. – The San Jose Earthquakes earned their first victory of the 2019 MLS regular season by defeating the Portland Timbers 3-0 at Avaya Stadium on Saturday evening. The Quakes got first-half goals from Shea Salinas, Danny Hoesen and Cristian Espinoza, while goalkeeper Daniel Vega saved a penalty kick in the shutout victory. 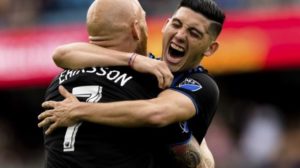 On the overall match:

“Before anything, today really is a good evening. I think the team understood well, they all played equally. We proposed what we were looking for. I think we played a great first half. We scored at the right moments. But yes, I did like the awareness of everyone and the convictions. It’s not easy to come from a lot of losses and play such an important match for everyone, above all since there were a lot of changes. I’m happy for the fans that were able to celebrate this match and happy for the players and us since we dedicated a lot of time and passion to this.”

On how the team is understanding the new system:

“Today we finish with a win and everything is much nicer. But we did play well during some minutes in past matches, without having as many chances at goal as we did today. That’s why we played with three forwards and one attacking midfielder and today we saw that style of play that we are looking for. Now we need to go deeper and hold on to this. I really liked the intensity, how they attacked from the sides, how they combined inside, the patience we showed to hold the game and move the ball from one side to another, hopefully we can continue like this.”

On holding back Diego Valeri and the rest of the Timbers’ offense:

“People think that our whole system is man to man, and that’s not true. We play mainly with one free player at the back and depending on where his forward is, he goes and marks and the other defender becomes free. The defenders were used to playing in a line, and honestly, I don’t like that. I think it’s like playing at risk all the time. So, with this change in system, it will take some time to adapt. I used to be a player and I understand. Also, I feel that [Anibal] Godoy played a great game, very smart. Where he cancelled out [Diego] Valeri, which isn’t easy since he is a great player. He is one of those players that makes a difference, but Godoy played well too. I told my players to be reversible, they should play but also mark their players. So that responsibility was shown by everyone.”

On the team’s performance in the game:

On how tough it was to be inactive for the first four games of the season:

“Obviously it was tough. I missed a few weeks of training. I’ve been away and I needed to get fit and get a lot of training sessions in my system. Coach told me I had to be patient. Today was my chance. One goal could have been five, but I’m happy.”

On the mindset after last week’s disappointment:

“We wanted to bring a lot of energy. We put some new guys in the team that obviously want to play and fight for their spots. The mentality has always been the same even though people from outside started to get frustrated and upset with the team, but that’s normal. We always kept believing in ourselves. If you work hard and believe in what you do, the results will come.”

On what the victory means to the players:

“It means a lot. Personally, this was one of my hardest preseasons that I’ve ever had. We worked really hard for it, and when you lose the first four games of the season, that’s not an ideal start. We were waiting for this one and 3-0 is a very good result.”

On what was different in today’s game:

“We were a little bit more positive on the ball. We knew we could hurt them. They were in a tough spot as well. We attacked with a lot of positive energy and went after them. Sometimes it just clicks.”

On his role in the team’s win today:

“I’m very happy with the first win of the season. We have to keep playing like this to value this great play that we all did today.”

On what the game means for him with his first MLS win and second goal:

“Like I said before, I’m very happy. At a group level, this signifies a lot for everybody. All of the games we try our best to bring happiness to the fans. We haven’t been able to yet, so today we’re very happy. It’s a big value today with the win, and hopefully we can keep getting more victories.”

On the team’s communication:

“It was good. It was difficult. Last week, we lost a game 5-0 so it was really hard for us. In these moments, we can see the value from the group turning around from a game like last week. This shows a lot of character from the team. They have a lot of fight in them.”

On adjusting to the MLS and new system:

“I’m very happy. The rest of the team have all received me very well. They’re all very amicable. I didn’t expect so much love in such little time from everybody. I’m happy for that. It makes things much easier coming over.”

On playing with Chris Wondolowski and Danny Hoesen:

“There isn’t very much difference. They’re both great players. We’re all working hard. It shows you that we have different options on the forward line. Like I said before, we’ve played four games and haven’t been able to give Wondo a lot of clear options, but hopefully from now on, Wondo or Danny can keep scoring a lot of goals.”