Machu Picchu, Peru, Apr 8 (EFE).- Thanks to recycling, the Inca citadel of Machu Picchu, located in southeastern Peru, has found a circular economy and sustainability that will lead to salvation in the face of the threat posed to this UNESCO World Heritage Site by tourism and the waste it generates.

Last week, officials, residents and two companies, Grupo Aje and Inkaterra, inaugurated an organic waste-processing plant that will process the eight tons of refuse per day generated by tourism and turn it into bio-coal, a powerful fertilizer that will be used to reforest the park that is home to the citadel.

This is the third waste-processing plant to be opened in the area. 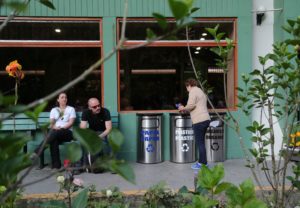 One plant processes the oil used by the 200 hotels and restaurants located at the foot of the ruins into biodiesel and glycerin, while another compacts the hundreds of kilos of plastics discarded each day by the 4,000 visitors who visit the site.

The town of Machu Picchu will be the first community in Latin America to recycle 100 percent of its solid waste and turn it into “a resource instead of a problem,” becoming “a model of a sustainable city,” Grupo Aje communications director Jorge Lopez-Doriga said.

The project started as a response to the possibility that UNESCO might remove Machu Picchu’s status as a World Heritage Site due to the mishandling of waste, Liza Masias, the marketing chief for Peruvian green hotel chain Inkaterra, told EFE.

“At that point, we said that something had to be done quickly and we have succeeded in making the threat go away. Tourism continues in a much cleaner town,” Masias said.

The hotel executive noted the growing importance for companies of incorporating environmental sustainability into projects, a feature that has “a minimal cost” but produces good results.

The environmental and archaeological preservation challenges faced by the Inca citadel are large, since the ruins are located in a remote mountainous jungle accessible only by rail. 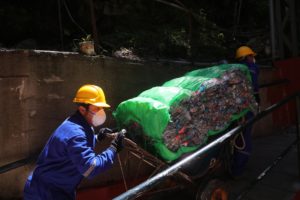 Visits by tourists, whose numbers have soared since Machu Picchu was named a World Heritage Site, are one of the engines of the economy in Peru, which could hardly do without the income generated by the citadel.

The government is responding to these problems by promoting a circular economy that includes tourism, Deputy Environmental Management Minister Albina Ruiz told EFE.

“We have to work on two issues – sustainable consumption and production. We have to change our mentality, we have to consume products that are recyclable or reusable, and the producer must make products that last longer in the environment,” Ruiz said.

As one of Peru’s “natural” economic resources, Machu Picchu could not survive without implementing sustainability principles, the government official said.

“There is no way we can extract, produce and throw away natural resources, you just can’t … We have taken more (out of nature) than it can handle,” Ruiz said.