The 2019 Ford Ranger is here, and it’s entering into the most competitive mid-size truck market in decades. Given Ford’s hallowed place in the world of pickup trucks, we were anxious to get our hands on the new rig to see how it stacked up. But first, a little history.

When the Ford Ranger was introduced in North America back in 1983, it brought with it a combination of size, utility and most importantly, value. By all reports, they were great little trucks, and could be had with a a wide variety of drivetrains and cab configurations.

But in 2012, production ceased, and Ford was left with a seven-year gap in the light-duty truck segment. For 2019, the Ranger features a 2.3-liter turbocharged 4-cylinder engine, a 10-speed transmission, and a host of new technology we expect folks will love. 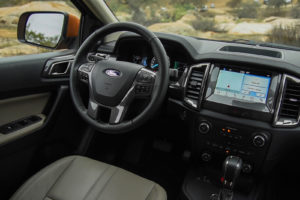 The Ranger is reasonably accommodating. The front seat is roomy and easy to get in and out of, but the same isn’t true of the crew cab’s rear bench. Likewise, visibility out the front is good, but the view out the rear is another story. Our biggest complaint involves the interior switchgear.

Ease of use. Although the Ranger’s controls are generally easy to understand, certain ones are disappointing. The lack of physical shortcut buttons for the touchscreen and the many tiny buttons that make up the climate control interface are something you’ll have to deal with every day. We’re not fond of the layout and operational logic of the 4WD controls either.

Getting in/getting out. The front door openings are broad, and the floor height isn’t too high. There’s no driver-side grab handle, but the front passenger gets one. The rear seat is a bit harder to enter due to a lack of toe space.

Driving position. The driver’s seat is nicely placed, and the telescoping steering wheel offers a good range of adjustment. The XLT’s manual seats, however, have a coarse backrest angle adjustment. Some drivers might not be able to find their ideal spot.

Roominess. There’s no lack of room in the front part of the Ranger’s cab. Legroom is excellent, and headroom is more than sufficient. It’s a bit tight at shoulder level, however. The back seat also has plenty of headroom, but legroom is tight. The front seats have a cutout to help counteract this issue, but it’s not enough.

Visibility. It’s fairly easy to see out the front because the hood slopes away and dips down above the headlights. The outside mirrors are sufficiently large, but the very tall bedsides and tailgate constrain the view directly out the back. The rearview camera alleviates this issue in parking lots but obviously not when cruising down the road.

Quality. Our test truck has consistent build quality, but the interior plastics are pretty unimpressive. The inside does not reflect recent advancements in other all-new pickups. 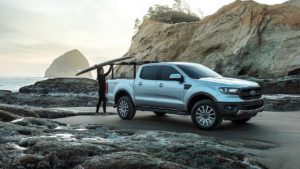 We like most of what the Ranger has to offer, especially if you buy an XLT or higher. Those come with a Sync 3 touchscreen system with Apple CarPlay and Android Auto and a broad suite of driver safety and convenience aids. But the touchscreen could stand a few shortcut buttons, and folks without a smartphone and reliable data service will need to spend $795 on the Technology package to get built-in navigation.

Audio & navigation. The Ranger’s Sync 3 system relies on an 8-inch touchscreen. Sure, there are prominent volume and tune knobs. But what’s lacking are physical shortcut buttons, which make it easier to do basic tasks without poking the screen to drill down to the relevant menus. Integrated navigation is optional.

Voice control. Sync 3 voice commands work reliably, and they respond to many natural language commands to accesmusic, radio stations and certain navigation functions. iPhone users have the additional option to hold the button down longer to access Siri on their plugged-in smartphone.