For producers, achieving this international recognition is important to highlight the quality of the product, Endulfo Gabriel, a member of the royal quinoa regulatory council in the southern highlands, said. 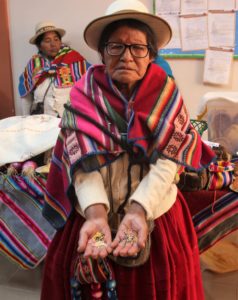 To begin this process, the council must submit an application to the Bolivian National Intellectual Property Service so that the denomination of origin is established throughout the country.


After that, the registration process will begin “immediately” with WIPO, a UN agency based in Geneva, Gabriel said.


In 2014, Bolivia obtained the standardization for its grain’s denomination of origin in Ecuador, Colombia and Peru.


“Time’s almost up. We are in the process of validating the traceability process and we estimate that in approximately one to two months we will have the documentation ready, and we’ll immediately start the process with the WIPO,” Gabriel said.


Some 40 percent of the royal quinoa grown in Bolivia, according to Gabriel, is exported to Europe, a market that demands high quality, so the grain’s accreditation could help open more markets.


Some Swiss companies have shown an interest in buying royal quinoa with a registered denomination of origin, the regulatory council member said.


Quinoa has been grown in the Andes for 7,000 years and is considered a sacred food by the indigenous people of the Bolivian highlands, as it was by the later Inca and Tiahuanaco civilizations.


Royal quinoa is extremely nutritious due to its high concentration of protein and vitamins, and this is linked to the characteristics of the place where the grain is grown near the Uyuni, Thunupa and Coipasa salt flats.


“Studies have found that the influence of the salt is a fundamental factor for this quinoa to have totally exceptional properties that have served to produce a product of the highest quality,” Gabriel said.


For his part, Reinaldo Pereyra, a grower here in Salinas de Garci Mendoza, a region known as the “capital of royal quinoa,” said the denomination of origin registration would help farmers sell the grain at a “fair price.”


“Production of royal quinoa is more expensive due to the (quality) control process and this would mean a fair price and, at the same time, having more resources and opportunities for the improvement of the land and production,” Pereyra said.


The geographical area where royal quinoa is grown is comprised of 322 communities in Oruro and Potosi provinces.