Lima, Apr 10 (EFE).- A former Peruvian president suspected of corruption was arrested at his home in this capital Wednesday in compliance with a 10-day preliminary detention order.


National Police officers carried out the warrant against the 80-year-old Pedro Pablo Kuczynski, who slammed the move on Twitter.


“It’s an arbitrary action. I’ve fully cooperated with all investigations and punctually responded to all summons by judicial authorities,” he wrote.


According to the ruling, published by local media, Judge Jorge Luis Chavez issued the order at the request of prosecutors who had submitted evidence of money laundering in connection with two projects awarded to Brazilian engineering giant Odebrecht.


Those projects – sections 2 and 3 of the Inter-Oceanic Highway and the Olmos irrigation and hydro-energy project – were awarded while Kuczynski was a Cabinet official in the 2001-2006 administration of President Alejandro Toledo, who is accused of accepting $20 million in bribes from Odebrecht and is currently a fugitive from Peruvian justice who lives in the United States.


The 80-year-old Kuczynski, who was Peru’s president from 2016 until his resignation in early 2018, had been barred from leaving the country and was following the investigation from his home in Lima’s financial district. 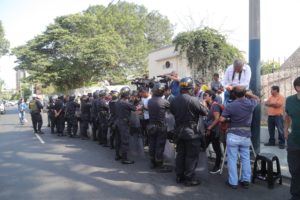 
The judge also ordered that searches be conducted at the properties of Kuczynski, Kisic and Bernaola, as well as at the office of the former president.


The goal of the raids is to obtain evidence relevant to the investigation, including bank account slips, electronic deposits, documents pertaining to the buying and selling of personal property and public deeds, the judicial resolution read.


Two key figures in the center-right Contigo (PKK) party founded by Kuczynski, lawmaker Gilbert Violeta and Peruvian Vice President Mercedes Araoz, said the detention order was excessive because the former head of state has cooperated with the corruption investigation since it was launched last year.


Kuczynski resigned in March 2018 over allegations he lied to Congress about more than $782,000 that a financial-consulting business he owned, Miami-based Westfield Capital Ltd., received between 2004 and 2007 from Odebrecht, which has admitted to bid-rigging schemes that involved the payment of hundreds of millions of dollars in bribes to officials in more than a dozen countries.


During the time that Westfield received those payments from Odebrecht, Kuczynski served in two senior positions in Toledo’s administration – economy and finance minister and prime minister.


He faced an impeachment trial at the time of his resignation and his position became untenable after videos surfaced of allies attempting to buy the support of opposition legislators.


On Dec. 22, 2017, a few months before his resignation, Kuczynski fought off a bid to remove him from office thanks to the votes of supporters of ex-President Alberto Fujimori, who had been sentenced to 25 years behind bars in 2009 for ordering military death-squad killings amid his government’s effort in the 1990s to crush the Shining Path guerrilla group.


Two days later, Kuczynski pardoned Fujimori on medical grounds. The move sparked protests by victims’ groups, but Kuczynski denied that it had anything to do with the congressional vote.


Peru’s Supreme Court, however, overturned the pardon and ordered Fujimori back to prison in October of last year.


Odebrecht reached a settlement in December 2016 with the US Justice Department in which the Salvador, Brazil-based engineering giant pleaded guilty to paying hundreds of millions of dollars in bribes to government officials around the world.


As part of the settlement, Odebrecht has been cooperating with prosecutors in the affected countries to bring corrupt officials to justice.