The most powerful operational rocket on the planet took off at 6.35 pm local time (22.35 GMT) from the historic 39A launch pad at the Kennedy Space Center, the same platform that the Moon missions of the Apollo program were launched from, and then managed to recover for the first time the three Falcon 9 rocket parts that make up the device. 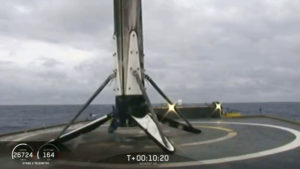 Less than eight minutes after takeoff, the two boosters landed side by side on Cape Canaveral US Air Force station, while the central core stage landed itself one minute later on the drone ship called “Of Course I Still Love You” in the Atlantic Ocean.

This successful landing of the three rocket parts represents a new step in the trajectory of the company, owned by tycoon Elon Musk, whose policy is to reuse rockets in order to reduce the cost of space travel.


Thursday’s launch, which had to be postponed from the day before due to weather conditions, is the second since the initial trip in Feb. 2018, when Falcon Heavy made a test flight with as dummy payload a Tesla electric roadster sent into deep space with a mannequin dressed in a space suit, which they called ‘Starman’, in the driver’s seat.


On that first voyage, however, the core stage failed to land on the Atlantic landing platform and instead plunged into the sea at a speed of more than 480 kilometers per hour. 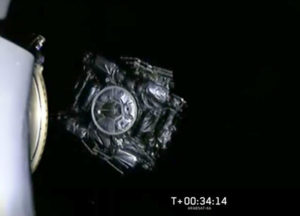 More than a year later, SpaceX has now launched the 70-meter-high Falcon Heavy, designed to carry more than 64 metric tonnes of cargo, with the Arabsat-6A on board. The Arabsat 6A is a modern communications satellite developed by Lockheed Martin for Arabsat, an organization founded by the Arab League in 1976 to provide telecommunications services to the region.


The modern and innovative satellite, weighing more than 5,900 kilograms, will provide television, radio, internet and mobile communication services throughout Europe, the Middle East and Africa, according to SpaceX.


Nearly half an hour after taking off from Cape Canaveral aboard the Falcon Heavy, the satellite separated from the rocket and was placed in a geosynchronous orbit where it will remain for years.


With this deployment the Falcon Heavy, created with the goal of sending manned missions to the Moon and Mars, has successfully completed its first commercial mission.