Tehuantepec, Mexico, Apr 12 (EFE).- Iguanas and more iguanas. An ancient dish made from iguana meat is seasonal Holy Week fare in this town in the southern Mexican state of Oaxaca.


Centuries ago, iguana meat was a regular part of the diet in Tehuantepec, but now it’s consumed only during Holy Week as an echo of the ritual sacrifices performed by Mexico’s indigenous cultures.


The head of the municipal cultural council, Daniel Peña, told EFE that while the tradition is observed throughout the region known as the Isthmus of Tehuantepec, it “has a larger ritual significance” in his town. 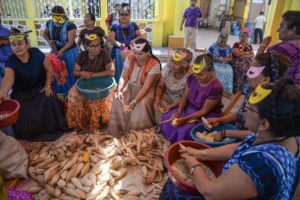 “It is only consumed on Fridays in Lent, and the killing must be done at the church,” he said of the practice, which reflects a syncretic mix of Catholicism and indigenous beliefs.


A traditional mole-dish is also prepared at church, using pumpkin seeds, eggs, tomatoes and iguanas, which are grilled before being skinned.


The iguanas are then cut and placed inside corn tamale.


“Two or three pieces of iguana are placed in the dough with an iguana egg. Everything is covered with mole, and the tamale is wrapped,” Peña said.


The tamales are then placed in a pot to cook overnight.


In Mexico, there are around 20 iguana species, 11 of which are endangered, according to scientists at the National Autonomous University of Mexico (UNAM).


The tradition dates back to the period Dominican friars arrived in Tehuantepec after the Spanish conquest of Mexico five centuries ago to convert the populace to Christianity.


As the process took hold, killing and consuming iguanas took the place of human sacrifices to the pre-Colombian deities.


In Juchitan, Oaxaca, the peak of the celebration is on Palm Sunday, when residents visit the cemeteries to clean the tombs of their ancestors and eat iguana tamales.


They go the cemetery to thank the souls of the dead for visiting them in the past, according to tradition.


The iguana was an important creature in the Zapotec culture that prevailed in this region before the conquest and depictions of iguanas were common on pottery.