Twenty-seven bodies were found in the northern state of Sonora and 12 others in the western state of Jalisco, the attorneys general of these states said Sunday.

The remains of 12 people were found in a mass grave at a farm outside Guadalajara, the capital of Jalisco, but the bodies have not been identified and their gender remains unknown due to their advanced state of decomposition, AG’s office spokesmen told EFE. 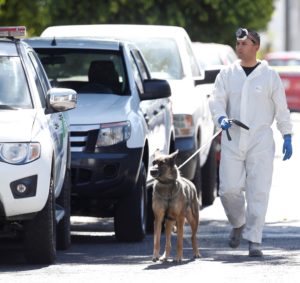 Investigators initially found the remains of five individuals in the clandestine grave, which was discovered on April 7, but further digging on Saturday turned up the remains of seven more people.

In Cajeme, a city in Sonora, 19 clandestine graves containing the remains of 27 people, including 24 men and three women, were found, sources close to the investigation told EFE.

The discovery, initially reported to be of 25 bodies, was made on Saturday by Guerreras Buscadoras, a non-governmental organization of women who have reported family members missing in the rural Yaqui Valley, where gangs are waging a turf war.

The women were accompanied by a team of 10 Sonora AG’s office investigators and forensic specialists, who carried tools to search for buried bones.

Maria Teresa Valadez, leader of Guerreras Buscadoras, told EFE that the goal was to provide training to women who have missing family members in the municipalities of Cajeme, Navojoa and Hermosillo, all in the state of Sonora.

Valadez, who has been searching for her brother Fernando since 2015, said that they managed to get a commitment last week from President Andres Manuel Lopez Obrador and UN High Commissioner for Human Rights Michelle Bachelet so Sonora can have a state commission to search for missing persons.

On March 31, the women found the bodies of eight people – four men and four women – in the Yaqui Valley.

Mexico identified at least 2,000 clandestine graves between 2006 and 2016 containing the bodies of 2,884 people murdered and buried by drug traffickers and other organized crime groups, an independent journalistic investigation found, citing figures from state prosecutors.

The story, titled “A donde van los desaparecidos,” on which a group of Mexican journalists worked for almost two years, suggests that clandestine graves are widespread in 24 states and can be found in one of seven municipalities.

In Mexico, according to official figures, 40,000 people are listed as missing and 26,000 unidentified bodies are lying at morgues.