Cucuta, Colombia, Apr 14 (EFE).- The United States Secretary of State on Sunday urged the Venezuelan president to re-open border crossings with Colombia and Brazil to allow the entry of humanitarian aid into the country, which has been gripped for years by a severe economic and political crisis.


Mike Pompeo visited with Colombia’s president Ivan Duque and met with Venezuelan migrants at the Colombian border town of Cucuta, where he called on Nicolas Maduro to open the border and allow for the much-needed influx of supplies and aid.


“Mr. Maduro, open these bridges, open these borders. You can end this today,” Pompeo said in a joint speech with Duque.


Pompeo was mimicking former US president Ronald Reagan’s 1987 speech urging former Soviet leader Mikhail Gorbachev to tear down the Berlin Wall at the end of the Cold War. 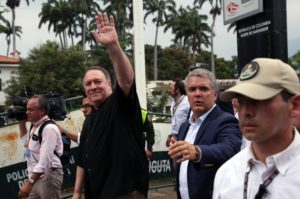 Tons of humanitarian aid from the US and other countries have sat at various border crossings between Colombia, Brazil and the Dutch Caribbean with Venezuela since Feb. 23, when Caracas imposed a military blockade.


In the three countries Pompeo visited before arriving in Colombia, the main issue on his agenda was the Venezuelan crisis and the challenges of dealing with the situation both regionally and internationally.


In Cucuta, the main border crossing point between Colombia and Venezuela, Pompeo visited a shelter housing Venezuelan refugees where he met with Duque and his vice president, Marta Lucia Ramirez, as well as Humberto Calderon Berti, the ambassador to Colombia appointed by


Pompeo and Duque chatted with some of the Venezuelans being housed at the shelter, including several children, who told them about the difficulties they had experienced living in their country.


Upon leaving the shelter, Pompeo signed a mural on which he wrote in English “Blessings to you all.”


Underneath that, Duque added the phrase “We’re united in solidarity and affection.”


Later, the two went to the Simon Bolivar border bridge between Colombia and Venezuela, where – amid a huge throng of reporters and surrounded by security guards toting bulletproof shields – they strolled around on the Colombian side of the bridge where shouts of “Freedom! Freedom!” from a large crowd of Venezuelans who called to them for help could be heard.


Duque told reporters in English that Colombia had taken in 1.5 million Venezuelans over the past two years.

Tienditas border bridge, which is being blocked by Venezuelan troops on the orders of Maduro, who claims that there is no crisis in the country and that the aid shipments could be the pretext for a US-led invasion. 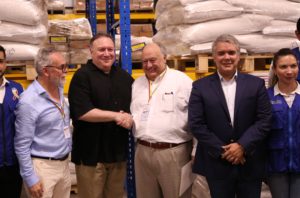 Before the arrival of the Secretary of State, Duque presented in Cucuta an “Impact Plan,” a package of measures to help Colombia’s provinces bordering on Venezuela deal with the effects of the crisis in the oil-producing neighboring country.


This was Pompeo’s second visit to Colombia this year after he traveled to the city of Cartagena on Jan. 2, where he spoke with Duque about the Venezuelan crisis and the fight against drug trafficking.


Venezuela has been mired in a severe political, economic and social crisis for years, but it became more acute in January when Maduro was inaugurated to a second six-year term after winning an election in May last year that was denounced as fraudulent by the Venezuelan opposition and a significant portion of the international community.


After Maduro’s inauguration, the head of the opposition-controlled Parliament, Juan Guaido, proclaimed himself Venezuela’s interim president.


He has since been recognized as the country’s legitimate leader by more than 50 nations around the world, including the United States and most of the nations of Latin America and Europe.