The 2019 Volkswagen Beetle will be the final edition (for now) of this iconic car. Partly because the Beetle isn’t as athletic or upscale as many of its competitors, it rides off into the sunset on the heels of a bottom-half finish in our subcompact car rankings.

What’s New on the 2019 Volkswagen Beetle?

A blind spot warning system and rear cross-traffic alert are standard. The base S trim level adds body-colored side mirrors with integrated turn signals, body-colored door handles and body-colored side sills with chrome trim. SE and SEL Final Edition cars mark the end of the road for the Beetle. Both have special exterior and interior trim, as well as alloy wheels (17-inch rims on the SE, 18-inch wheels on the SEL). The SEL Final Edition also has bi-xenon headlights and LED running lights and taillights, among other features. 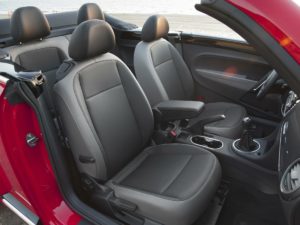 The 2019 Volkswagen Beetle is a two-door, four-passenger convertible with a standard power-operated soft top. There are four trim levels: S, SE, Final Edition SE and Final Edition SEL. Every Beetle Convertible comes standard with a 2.0-liter turbocharged four-cylinder engine good for 174 horsepower and 184 pound-feet of torque. A six-speed automatic is the only transmission available. 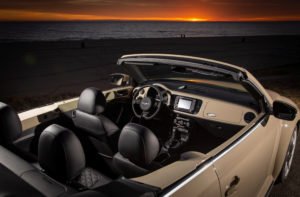 Acceleration should be strong whether you’re pulling away from a stoplight or overtaking on the freeway. But deceleration takes more effort than anticipated because the brakes aren’t quick to respond. Steering is responsive and quick on the highway, and it’s light when maneuvering at slow speeds.

Comfort: Though Volkswagen plays off the 2019 Beetle’s style, this is one of the more comfortable and refined small convertibles. The seats hug you without being oppressive, and the suspension dispatches road imperfections without transmitting any harshness to the driver.

Interior: The Beetle is bigger and generally easier to use than its few competitors. It has logically placed controls and it’s easy to enter and exit. Its roof is also high enough for a pair of tall adults in the front. Visibility out the back is hampered by a small window surrounded by the convertible top. 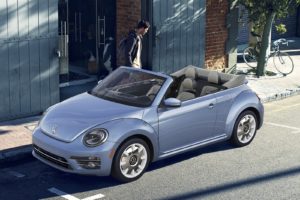 Utility: There isn’t much space in the cabin for personal items, and the small trunk is accessed by an awkward opening. But to be fair, virtually every comparably sized or priced convertible suffers from trunk issues.

Technology: As far as infotainment systems go, the VW Beetle’s isn’t cutting-edge, but it is relatively easy to use and the screen resolution is sharp enough to read at a quick glance. Apple CarPlay and Android Auto are found on all but the most basic S trim.

The 2019 Volkswagen Beetle comes in just one relatively efficient flavor.

Both the coupe and convertible are rated at 26 mpg city, 33 highway, and 29 combined thanks to the single engine and transmission combination—a 2.0-liter turbo-4 and a 6-speed automatic.

Despite its increased weight, the convertible manages exactly the same mileage as the coupe. For a while, the Beetle could be had with a thrifty diesel engine. However, VW was caught cheating on the federal emissions test and the diesel was pulled from the market.