The once-in-five years feature in the second most-populated country has always been the world’s biggest exercise in democracy, and Shyam Saran Negi, 101, has unfailingly voted in all the general elections to use his democratic right.


Negi was 34 when he became the first Indian voter by casting the first ballot of independent India’s first elections in 1951-52.


The short- and lean-framed centenarian among 900 million total Indian voters is excited to vote again on May 19 – when his home state of Himachal Pradesh in the north of India will hold the last of the seven phases of general elections that began on Apr. 11.


A celebrity of sorts and an ambassador of Election Commission of India to encourage people to vote in a country where turnout has remained between 61 to 66 percent in each of the 16 general elections held so far, Negi is one among many unique aspects of India’s quinquennial democratic carnival.


The retired schoolteacher will be marking his 102nd birthday on Jul. 1 this year.


But more than his longevity, he is happy, and “proud too”, to be the only Indian voter to take part in every general election the country has conducted since it became a republic following independence from Britain. 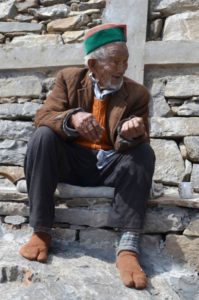 “I am the first voter of democratic India. I will be happy to use my democratic right again at the age of 102,” an ailing Negi told EFE.


Negi is barely able to speak due to age-related complications. But his son Chander Prakash said his father gets excited when he thinks of joining younger voters to elect members of the Lok Sabha, or lower house of parliament, in his lush-green, scenic village, some 275 km (170 miles) from the state capital of Shimla.


The former teacher vividly remembers the day when he became the first voter of India.


India’s first general elections after its independence from the British colonial rule were held in February 1952. But polls in Himachal Pradesh, a north Indian mountainous state, were advanced because it was feared that the region would be snowbound in February – the peak of harsh winter in the Himalayan region.


Therefore, voting in Himachal was held on Oct.25, 1951, five months earlier than the rest of the country.


Being a government employee, Negi was assigned a poll duty at a station outside his village. He could have easily missed out casting his vote.


But he requested the officer on duty to let him vote first before he proceeds for his poll duty, said his son, a government employee.


The request was granted and Negi became the first voter to cast his ballot as soon as the polling booth in his village was open to elect the country’s first parliament and government.


For the next nearly 60 years, he lived in obscurity and not many knew about the oldman’s feat.


Negi, who has spent his entire life in his hometown in the Sutlej river valley, known for its sprawling apple orchards, shot to limelight only after 2007 as before then, nobody knew about the first Indian voter.


A senior civil servant, Manisha Nanda, was chief electoral officer of Himachal Pradesh when she volunteered for a pilot project to prepare and issue an elector’s photo identity card in the state.


She researched about Negi’s home district Kinnaur, which is famous for a mountain sacred to Hindus called Kinnaur Kailash, close to the border with Tibet, and houses many temples dedicated to both Hindu and Buddhist gods and goddesses. 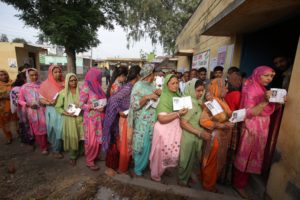 While studying the tribal district’s electoral history, Nanda came across a voter who was over 90-years-old and lives in a snow-bound area where the first parliamentary elections were held ahead of other places in the country.


Nanda told EFE that Negi’s age caught her attention and she asked election officials to visit him and find out how many times he had voted in his life.


He claimed he was among the first voters of India, Nanda said. But she felt was curious to uncover more of his story.


“I scrutinized all the election records. It was like a research project, a humongous job. And there I was. He turned out to be the first Indian voter and had voted in all the elections held in his life.”


It was in 2010 when the then Chief Election Commissioner Navin Chawla went to Kalpa village and met Negi and appointed him the ambassador to encourage people to vote in the state where voter turnouts are usually lower than other states because of the tough terrain.


In the last parliamentary polls in 2014, the state recorded a figure of 64.4 percent, two notches below the national average.


According to election data, out of over 5.1 million voters in Himachal Pradesh, some 1,011 are aged 100 or above.


The state election commission has decided to name all the centenarian voters in the state as poll ambassadors.


Negi still holds a distinction: nobody else has voted in all the state assembly, local and general elections.


But he does have a regret; this year will be the first time that he will not be accompanied to the polling booth by his wife and life partner, who passed away in 2015 – a year after they last voted together, their son said.


In a broken voice, Negi told EFE that he has instructed his children – four sons and five daughters, the youngest of whom is Chander Parkash, in his mid 50s – to vote come what may and teach their children to use their political franchise or “don’t ever complain about bad governance”.