Sao Paulo, Apr 15 (EFE).- Ariel Franco has gone from a crowded cell to having 300,000 followers on Instagram thanks to some eye-catching haircuts he learned while serving his sentence in a Sao Paulo prison.


Franco, born and raised in Brasilandia, one of the largest shantytowns in Sao Paulo, started working while very young at the fair as a vendor of candy apples, as did many other youngsters in the neighborhood.


Between one botched job and another, and after multiple failed attempts to find steady work, he discovered his “chance” in the world of crime, and at age 15 got into drug trafficking. Four years later, however, he was arrested and slammed into prison, where amid “so many inhuman situations,” he would learn the skill of cutting hair.


“I kept perfecting my cuts and learning new techniques. In time, I got more daring and started trying out new styles,” he recalled. 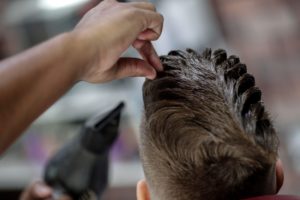 While behind bars, where he came to share a cell with another 56 inmates, he never imagined that, years later, he would become a phenomenon and an inspiration for boys of Sao Paulo with his daring “armored” cut with designs in a wide range of colors and that lasts for several days.


Thanks to this pioneering technique of the barber, little boys and teens can strut the streets of Brasilandia with multicolored hairdos featuring designs like flames, skulls and whirlpools.


For the last 10 months, Franco has rented a shop in the shantytown where he grew up and has around 20 customers every day. He hasn’t had any spare time since last June, since between his barbering days he travels around Brazil and even to other countries giving free classes, seminars and talks to motivate former inmates and ex-drug addicts.


“The Brazilian prison system is cruel, because it’s not interested in reintegrating people into society. I’ve witnessed several times how the guards give beatings, leave inmates without food, and punish everyone for the offense of an individual,” he said.


For that reason he considers it his “mission to change the lives” of children, ex-cons and drug addicts, and “to open doors” to the fact that, though it “might be very hard, reaching the heights is not impossible.”


“I want them to know that, with determination, they can be anything they want to be,” he said.


Almost five years after leaving prison, the barber is now a total celebrity on social networks, his main advertising platform, where he shares every one of his masterpieces and has attracted more than 300,000 followers.


“My customers, those boys who come here, go through the same hardships, disappointments and setbacks that I did when I was a kid. I want to offer them hope and show it’s possible to be successful in life,” Franco said.