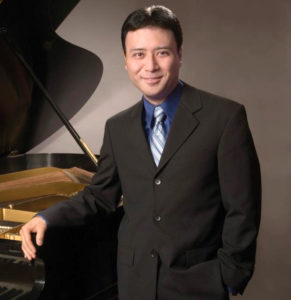 When Ringling Brothers wanted a score for 50 elephants and 50 ballerinas – Stravinsky obliged. A much earlier commission resulted in a piece about a puppet’s love and heartbreak. Petrushka is one of Stravinsky’s most popular works filled with Russian folk tunes and brilliant orchestrations.

Astonishingly, pianist Jon Nakamatsu, famed for his Rachmaninoff performances, has never before played the Second Concerto for South Bay audiences. From its first chords, the concerto casts its spell.

The composer believed that music’s mission is to express emotion, and this vibrant concerto succeeds so well that its themes have been adopted for innumerable popular songs.

About Jon Nakamatsu: A native of California, Jon Nakamatsu claimed a distinguished place on the international musical scene in June, 1997 when he was named the Gold Medalist of the Tenth Van Cliburn International Piano Competition, the only American to have achieved this distinction since 1981.

A former high school German teacher, he became a popular hero overnight in the highly traditional medium of classical music. About Tatsuya Shimono: Born in Kagoshima in 1969, Tatsuya Shimono cemented his international reputation as a conductor by winning First Prize at the 47th Besançon International Competition in 2001. 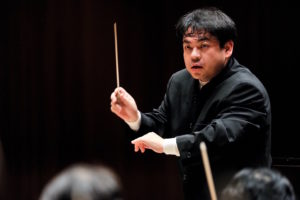 Since then he has guest conducted major orchestras in Japan and abroad. He received great acclaim for his debuts in subscription concerts with the Orchestra dell’Accademia Nazionale di Santa Cecilia and the Czech Philharmonic Orchestra in 2009, and then in March 2010, made his debut with the Stuttgart Radio Symphony Orchestra. 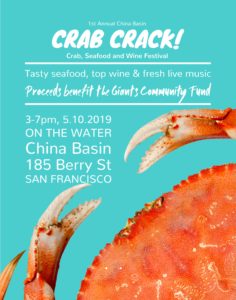 The view is stunning and the food and wine are perfect. A ticket to the Crab Crack includes fine wines, craft beers and plenty of fresh crab from the Oregon Coast, but does not include the entry to the baseball game. After you eat you may attend the SF Giants game as they play the Cincinnati Reds at the ballpark, right next door.

The Crab Crack event benefits The San Francisco Junior Giants Community Fund. Established in 1994, Junior Giants reaches into communities and offers youth a chance to learn the basics of baseball during the summer, while also discovering and developing essential life skills.

The innovative program makes a difference for over 25,000 young participants annually. China Basin at 185 Berry Street represents an exceptional opportunity for life science and technology companies to combine a campus environment, waterfront location and the highest quality tenant services and amenities.

Tickets can be purchased on-site 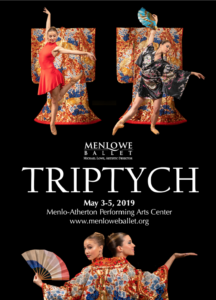 Triptych features Kimono Wednesdays and Playing Love, both choreographed by Michael Lowe, and my favorite The Lady with the Lamp, a collaboration between Lowe and choreographer Sarah-Jane Measor, honoring the life and work of Florence Nightingale. Absolutely mesmerizing!

Kimono Wednesdays is a ballet inspired by Claude Monet’s 1876 painting, La Japonaise. Intrigued by the painting and the conversations it elicited, Menlowe’s Artistic Director Michael Lowe has crafted a whimsical “night-at-the-museum” fantasy where works of art spring to life. Central among those works is La Japonaise, Monet’s portrait of his wife Camille donning a blonde wig and red kimono, and which art historians have claimed is his wry commentary on the Parisian fervor for Japanese culture.

The ballet’s title comes for a marketing strategy employed by the Boston Museum of Fine Arts to promote their exhibit; the museum hosted events on Wednesday evenings inviting patrons to take photos next to the painting while wearing a kimono and then share the images via social media. The campaign resulted in controversy when a small group of protesters claimed cultural appropriation.

The Lady with the Lamp, a triumph of Menlowe’s 2018 spring season, is a choreographic collaboration between Michael Lowe and Sarah-Jane Measor. The ballet is a stunning and poignant tribute to the ground-breaking contributions of Florence Nightingale, a visionary who set the standard for modern medical care and revolutionized the nursing profession.

Lowe’s Playing Love is a dreamscape comprised of romantic neoclassical duets that illuminate various forms of love. Originally created in 2015, Lowe has refreshed this alluring work with new sections and enhanced choreography.

This event will take place at a private home in the stunning town of Saratoga, CA.

The address will be given to those who purchase tickets or become special donors and sponsors of the 2019 Annual Young Artists Concert or the exciting 25th Anniversary Season. 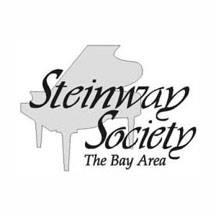