Havana, May 8 (EFE).- Cuba’s president thanked Spain’s government and Spanish companies for their continued support in the wake of the United States’ latest moves to tighten its embargo on the Communist-ruled island.

It was a “gesture of recognition of Spain’s support and its commitment to the island’s economic development,” a source who attended the reception told EFE on Wednesday.

In a brief speech, Diaz-Canel thanked Spain’s government for leading European opposition to Washington’s decision to activate a previously suspended section of the Helms-Burton Act, a 1996 law that tightened the long-standing US embargo on Cuba.

US President Donald Trump allowed waivers to Title III of Helms-Burton to expire earlier this year as part of efforts to bring about political change on the Communist-ruled island.

Title III, which allows US citizens (mainly Cuban-Americans) and corporations to sue entities that have been “trafficking” in property that was seized by the Castro government on or after Jan. 1, 1959, had never gone into effect due to rolling six-month waivers. 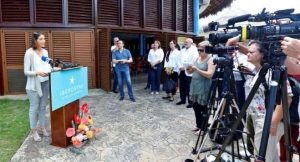 The move could affect Spanish companies operating on the island.

Diaz-Canel also reiterated the Cuban government’s stance that the law is illegal due to its extraterritorial reach.

Among those attending the meeting with Diaz-Canel were representatives of around a dozen Spanish companies, including the leading hotel groups on the island (Melia, Iberostar and Barcelo), Iberia airline and the Globalia and Valentin groups, that same source said.

No lawsuits have been filed against Spanish companies since Title III entered into force last week, although they are possible considering that several of those firms use property or buildings that were expropriated in the years following the 1959 Cuban Revolution.

Maroto, who arrived in Cuba on Sunday for the Fitcuba 2019 tourism fair (featuring the Iberian nation as guest of honor), expressed her country’s strong opposition to Washington’s measures and reiterated Spanish Prime Minister Pedro Sanchez’s support for Spanish companies operating on the island.

The minister said Spain’s government, in partnership with the Spanish Confederation of Business Organizations and Spain’s Chamber of Commerce, has established a working group in Havana in preparation for what could be “years of litigation.”

Spain is one of Cuba’s main trading partners and the foreign country with the largest number of businesses established on the island.

Spanish companies have a particularly large presence in the island’s tourism sector, leading the way in the management of state-owned hotels.