The 2019 Subaru Crosstrek Hybrid is a bit of an anomaly. Normally, Subaru’s vehicles set themselves apart with enhanced off-road capabilities and utility. This one, however, is all about saving gas.

The new Crosstrek Hybrid isn’t the company’s first hybrid — there was a short-lived model in the Crosstrek’s previous-generation lineup. But it is the first plug-in-hybrid. Under the hood is a modified version of the Crosstrek’s regular 2.0-liter four-cylinder engine. For the electricity part, there are two electric motors and an 8.8-kWh lithium-ion battery pack that can be recharged with an external power source. 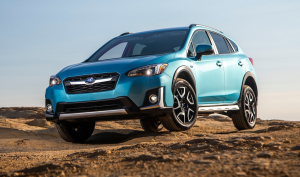 The result is an estimated all-electric driving range of 17 miles and an overall fuel economy rating of 35 mpg once the hybrid battery is depleted. This new plug-in costs a lot more than a regular Crosstrek when new, though tax incentives help defray the cost. Depending on your driving habits and access to charging stations, it’s possible the hybrid could start paying for itself in only a few years.

Be aware that there are better choices for a plug-in hybrid if you’re looking for maximum efficiency. The Chevrolet Volt, for example, has an all-electric range of more than 50 miles. But the Crosstrek is distinctive in its class for offering light off-road and foul-weather abilities thanks to its 8.7 inches of ground clearance and standard all-wheel drive. Overall, we think it’s worth a look.

If driven with a light foot, the Crosstrek Hybrid will travel Subaru’s claimed 17 miles on all-electric power and delivers 90 mpg-e. The crossover is also capable of traveling up to 65 mph on all-electric power. Once you pass that speed or apply more than 50 percent throttle, the gasoline engine turns on for more power. If the battery is low, the Crosstrek acts like a regular hybrid by frequently kicking on the gasoline motor for thrust and energy generation. Driving the Crosstrek like this gets you 35 mpg combined. Subaru says the total driving range on a full tank and battery is 480 miles, the same as the regular Crosstrek—the Hybrid has a 13.2-gallon tank versus the non-hybrid’s 16.6 gallons. At the time of this writing, EPA figures weren’t available. 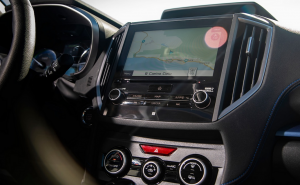 However, Subaru did give the Hybrid model unique features to set it apart from the regular model. Outside, Plug-In Hybrid badges are located on the front fenders and liftgate, and “Plug-In” is imprinted on the charge port door. The headlight projector rings are painted in blue, and the front grille, lower front bumper, lower body cladding, and foglight surrounds are accented in metallic silver. Further distinguishing the Hybrid model are the unique 18-inch wheels and black low-profile roof rails and spoiler. Four exterior colors are available, including the new and exclusive Lagoon Blue Pearl.

In the cabin, exclusive gray and navy blue leather covers the seats, door panels, and armrests. Bright blue stitching and interior accents panels add to the exclusivity. An electric switch replaces the non-hybrid’s manual parking brake, and the fuel door lever is replaced by a button.

The latest STARLINK Safety and Security system features include Advanced Automatic Collision Notification to alert first responders when an airbag deploys, and SOS Emergency Assistance to lend a hand when you encounter trouble on the road. Crosstrek Hybrid includes the STARLINK Security Plus package for 10 years. There’s also the new STARLINK Concierge service for personal assistance with tasks like navigation, restaurant reservations, and scheduling service appointments.