Madrid, May 10 (efe-epa).- Implementation of the peace deal with the now-demobilized FARC guerrilla group will take longer than originally anticipated, the high counselor for Colombia’s post-conflict period said here Friday.

But Emilio Archila, who made his remarks in an interview with EFE, insisted that conservative Colombian President Ivan Duque is fully committed to the successful application of the peace deal signed by his predecessor, Juan Manuel Santos.

Amid the problems of political violence that continue to plague the South American country, Archila underscored authorities’ efforts to bolster protections for ex-guerrilla fighters and social leaders, several hundred of whom have been killed over the past year, and denied that the government has been slow to act.

The Office of the United Nations High Commissioner for Human Rights said Friday in Geneva that there has been a sharp increase in the number of social leaders killed in Colombia, with 51 cases reported in just the first four months of 2019.

In 2018, a total of 648 people were slain in acts of political violence in Colombia, according to a report released Thursday by the Center for Research and Popular Education (Cinep).

The official responsible for implementing the peace deal signed in 2016 said “armed groups” operating in areas where Revolutionary Armed Forces of Colombia (FARC) guerrillas once was active were largely to blame for that violence, which he said is generally related to voluntary coca crop substitution programs. 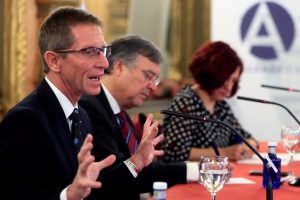 Archila also recalled that Duque announced on Tuesday the creation of a special group of judges to investigate and prosecute those responsible for threats and crimes against social leaders.

He said official figures show there has been no increase in attacks on social leaders but that that does not mean it is not a pressing issue.

Archila also said the government’s attempt to modify six articles of the law that provides the legal framework for the Special Jurisdiction for Peace (JEP), a matter to be decided by the Constitutional Court, is in no way a bid to change the peace agreement through the back door.

“None of the fundamental guarantees for ex-combatants” in Colombia’s decades-long fight against the FARC, which involved government forces, leftist guerrillas and paramilitary groups, are contained in those six articles, he said.

Archila earlier took part in a Tribuna EFE roundtable discussion at the Casa de America cultural center in Madrid, where he acknowledged that it would take longer than initially anticipated to implement a portion of the peace agreements.

For example, an agreement on reinserting ex-combatants into civilian life could take seven or eight years, based on experiences with other international processes, compared with the timeframe of two or three years initially stipulated, Archila said.

Long-term plans to build infrastructure in the most neglected rural areas will require even more time – with 10 to 15 years likely needed for the construction of water, sewage and communication systems.

The budget for the entire process amounts to 120 trillion pesos (around $37 billion), Archila told EFE, expressing thanks for the “vital” international support provided by the European Union and saying that Spain in particular has taken a lead role.

Referring to violent deaths of ex-combatants of the FARC (now a communist political party that uses the same acronym but goes by the name Common Alternative Revolutionary Force) since the signing of the peace deal, Archila said a political motivation had been identified in only three of those cases.

Some 120 former FARC fighters have died in acts of violence since the peace deal was signed in late 2016, according to media figures.
“We’ve spared no effort to provide them with protection,” Archila said in reference to the former guerrilla fighters.