Mexico City, May 12 (EFE).- Tenochtitlan, the hub of the Aztec empire, so impressed Hernan Cortes and his men when they first set eyes on it in March 1519 that the Spanish conquistador thought long and hard about whether to replace the metropolis of imposing temples – some as high as 40m (131ft) – with a European city.

The territory now occupied by Mexico City was described by Spanish soldiers and missionaries as the Venice of the Americas.

“It had to be difficult to decide between destroying it and making something new. Hernan Cortes experienced a great emotional conflict,” architect and preservation activist Maria Bustamante told EFE. 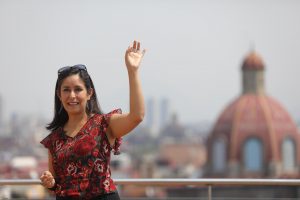 But Cortes soon realized that a city where temples and other ceremonial structures took precedence over dwellings would not accommodate European settlers.

Indeed, a European viewing the area in 1325, when the Mexicas began building Tenochtitlan, would have found it unsuitable for any kind of city.

The Mexicas, however, saw the small, long-uninhabited island surrounded by lakes and wetlands as predestined to serve as their capital.

“What they saw was that conception of having found the place, the prophecy,” Bustamante said.

During the nearly two centuries between their arrival and the coming of the Spaniards, the Mexicas made Tenochtitlan into a very developed city, according to journalist Jorge Pedro Uribe, who praised the founders for their “disciplined” approach to urban planning.

“The city was divided into four segments, each with its own ceremonial center, as well as the grand main temple at the union of the two great axes, north-south and east-west,” Uribe told EFE. “They also had canals and a sophisticated system of water control.”

While some of the surrounding lakes were freshwater, others held saltwater, so the builders needed to devise ways to bring drinking water into the city and keep the saltwater out.

“They had great hydraulic engineering, very much adapted to nature. We could say they were the first sustainable urbanites,” Bustamante said.

The Spanish recognized the value of the water scheme and tried to perpetuate it. The conquerors also stuck to the quadripartite division of the metropolis.
“Starting from that, they take advantage of the past and experiment with a Renaissance-style urban plan,” she said.

With the passage of time, knowledge of the Aztec approach to water control was lost due to “poor decisions related to trying to dominate nature,” such as draining the lakes, Bustamante said.

“It was the worst decision, but it was necessary,” she added. “Because the city was inundated with 3m of water for one or two years of every decade, which made it a difficult place to live.”

As a consequence of the drainage operation and other ill-considered moves, the historic core of Mexico City is sinking by up to 5cm every year. Some researchers say the territory now sits as much as 40m lower than it did at the time of the conquest.

Thanks to the soil subsidence, parts of the many pre-Columbian buildings that lie beneath colonial-era and modern structures have begun to poke out above the surface emerge.

“Tenochtitlan is not as swept away as they taught us, nor as far underground as we think,” Uribe said. “If we know to look, we can see Tenochtitlan in the historic center with just a little imagination and knowledge.”