“Let’s give new generations of Americans a reason to believe in” – U.S. Congresswoman Zoe Lofgren 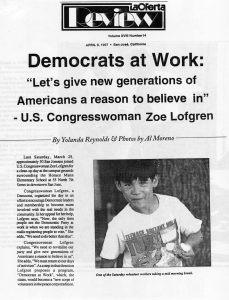 Congresswoman Lofgren, a Democrat, organized the day in an effort to encourage Democratic leaders and membership to become more involved with the real needs in the community. In her appeal for her help, Lofgren says, “Now, the only time people see the Democratic Party at work is when we are standing in the malls registering people to vote.” She adds, “We need to do better than that.”

Congresswoman Lofgren explains, “We need to revitalize our party and give new generations of Americans a reason to believe in us.” She adds, “We must return to our days of activism.” As a step in that direction Lofgren proposes a program, “Democrats at Work,” which, she states, would become a “new corps of volunteers in the peace corps tradition, dedicated to building conﬁdence in the Democratic Party through grassroots community service.” 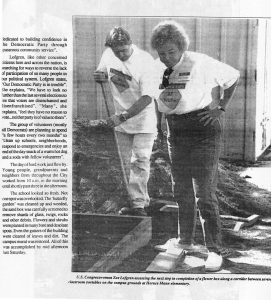 Lofgren, like other concerned citizens here and across the nation, is searching for ways to reverse the lack of participation of so many people in our political system. Lofgren states, “Our Democratic Party is in trouble.” She explains, “We have to look no further than the last several elections to see that voters are disenchanted and disenfranchised.” “Many”, she explains, “feel they have no reason to vote…neither party is of value to them.”

The group of volunteers (mostly all Democrats) are planning to spend “a few hours every two months” to “clean up schools, neighborhoods, respond to emergencies and enjoy an end of the day snack of a warm hotdog and a soda with fellow volunteers.”

The day of hard work just ﬂew by. Young people, grandparents and neighbors from throughout the City worked from 10 am. in the morning until shortly past three in the afternoon. 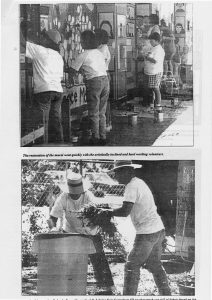 The school looked so fresh. Not one spot was overlooked. The ‘butterﬂy garden’ was cleaned up and weeded, the sand box was carefully screened to remove shards of glass, twigs, rocks and other debris. Flowers and shrubs were planted in many bare and desolate spots. Even the gutters of the building were cleared of leaves and dirt. The campus mural was restored. All of this was accomplished by mid-afternoon last Saturday.

A reaction from the students and staff of the school was not available for this article since they were all on Spring break. If you pass by the school, which is at 55 North 7th Street, take a look at what a relatively small group of people can accomplish in 21 short period of time.