The controversy could divide the community 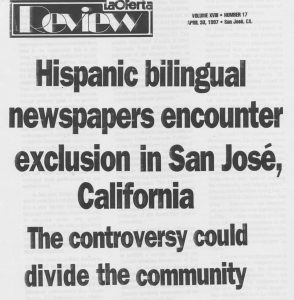 San Jose, California Non proﬁt organizations that are directed toward the interests of the Latino/Chicano/Hispanic community should be on the alert regarding the interests of some event sponsors.

As the demographics in San Jose and elsewhere are changing, elite businesses are leaping at opportunities to retain or increase their market share. Many are ﬁnally realizing that there are billions of dollars in disposable income in a Hispanic population whose market has been ignored in the past and, more often, has even been excluded from participating in the market place.

In San Jose, Knight Ridder Inc., which owns the local daily newspaper and a new weekly tabloid Spanish language publication, Nuevo Mundo, is enticing some non-profit organizations in the area to give them exclusive sponsorship. They seem to seek a monopoly on information regarding the activities and events of these organizations.

Their tactic is up front. It relies on the lack of awareness of leaders of some non-proﬁt organizations who have historically relied on the media to publicize their events. In San lose the Bilingual publications (La Oferta Review, El Observador and Alianza Metropolitan News) have generally been the first to come to their assistance.

The general public usually assumes that the nonproﬁt organizations have, as their highest priority, the widest dissemination of the news of their events and goals. It appears that those who accept sponsorship from the Knight Ridder Mercury News often do not understand the implications of some provisions of the contracts that they sign onto this very rich, nationwide media power.

To emphasize the incredible wealth of Knight Ridder/ Mercury News and now Nuevo Mundo a recent article in that paper announced that, at a cost of $1.65 billion, they had just purchased four major newspapers in the U.S. from Walt Disney Co. The article described Knight Ridder Chairman, Tony Ridder, formerly publisher of the Mercury News, as saying, “Two of these newspapers (the Kansas City Star and the Fort Worth Star-Telegram) are “two of America’s most important newspapers, (and) positioned in growth markets, with strong ﬁnancial performance and impressive editorial presence.”

Recently, a number of local Spanish language publishers gathered to discuss their concerns regarding some concerns regarding some practices that have occurred under the leadership of Mercury News Chairman, Publisher of the Mercury News and Director of Nuevo Mundo, Jay T. Harris. Among those attending, besides La Oferta, were Alianza Metropolitan News publisher George Villalobos and El Observador~La Voz Latina publisher Hilbert Morales, The three publications collectively distribute almost 50,000 copies each week and every other week more than 68,000 copies. The sum provides a signiﬁcant coverage of the South Bay Latino community.

In an editorial, by Villalobos, published shortly after the announcement of the large and powerful Knight Ridder chain’s intent to publish a weekly targeting the Spanish speaking community of San Jose, he expressed skepticism regarding their real interest, since past experience had demonstrated their indifference to the large and growing Spanish speaking community of the San Francisco South Bay.

The real interest, he and others believe, behind the establishment of the new publication seems to be for the enhancement of the Knight Ridder bottom line. According to Villalobos, in Southern California some small Hispanic/Latino oriented publications have found themselves driven out of business.

At that meeting, La Oferta publisher Mary Andrade described her concern at ﬁnding that several nonproﬁt organizations had recently contacted her to inform her to say that the previously agreed upon co-sponsorship of a particular event would now be retroactively denied because of Mercury News involvement.

One of these two organizations, the Hispanic Women’s Council of Northern California, had previously solicited La Oferta’s participation in sponsoring their annual women’s conference. The letter of solicitation was dated March 24, 1997. La Oferta co-publisher Mary Andrade responded immediately on March 26, offering free advertising valued at close to $3,000 as well as editorial and news coverage in both publications, La Oferta and El Vistazo (with a combined distribution of 35,500). Also proffered were the use of the newspapers’ logos and a company banner at the conference site.

On April 3, 1997, the President of the organization, Liz Martinez, wrote a letter of acceptance. Her letter states, “It is through the generosity of services and spirit of supportive facets of the business community that the Hispanic Women’s Council of Northern California can do their work of reaching the community and helping others.” She concludes her letter stating that. “I understand that Carmen Johnson (the group’s chairperson) has contacted you and asked that your logo be given to PRx (a public relations ﬁrm) for inclusion in our advertisement in the Mercury News.” “Additionally,” she adds, “(you will be provided a) camera ready ad for your (newspaper) La Oferta.”

A second non-proﬁt organization which was similarly compromised is the business group, the Hispanic Chamber of Commerce. They are planning a one day conference for May 14 in San José. Again, sponsorship was solicited from la Oferta on March 19. The Publishers gladly agreed to help with free advertising and news articles promoting the event.

Both of these local non proﬁts indicate that they came into existence to promote opportunities for often overlooked and neglected groups. Newspapers like La Oferta, El Observador and Alianza Metropolitan News also came into existence to serve a long ignored segment of the community and have survived many years because each has their own special readership that has remained loyal. Advertisers, recognizing this loyalty, find that advertising in the various publications is to their advantage if they  La Oferta Newspaper.want to reach the broadest possible audience which is, even within the Latino/Hispanic/Chicano community, very diverse.

At a discussion of these issues with Chamber Board President Felipe Luna and Hispanic Women’s Council of Northern California Board Chairperson Carmen Johnson, both expressed surprise that their contract with the Mercury News/Nuevo Mundo had stipulated exclusivity and that it included the onerous demand that “Nuevo Mundo will be given right of ﬁrst refusal for print sponsorship of this event the next time it is held.”

During the discussion, it became apparent to both Luna and Johnson that their organizational charter was seemingly violated and that they had essentially handed over control of their organization to the Knight Ridder/ Nuevo Mundo marketing department.

The charter of the Hispanic Women’s Council states,” The mission of the Council is to improve the status of the Hispanic Woman through education, career and leadership development activities and to empower them to fully participate and contribute to the social economic cultural structure of the region.” This seems to be in conﬂict with the stipulations made by the huge Knight Ridder Inc. corporate interest. Additionally, La Oferta publisher, Mary J. Andrade was a co-founder of el Concilio de Mujeres Hispanas del Norte de California (Hispanic Women’s Council) and remains a member in good standing.

Both Johnson and Luna promised to get more details of the ‘snafu,’ but a response was not received in time for the news deadline of this publication.

A call by this writer to Mercury News publisher and Nuevo Mundo Director, Jay Harris was not returned. His secretary tried to contact publisher Frank Andrade. Andrade was out of the country at that time.

This writer has a number of questions for Jay T. Harris. Among them are: Do you support diversity? Does Knight Ridder/ Mercury News plan to enter all ethnic niche markets in the area, including that of the Asian community, the Afro-American community, the gay/lesbian community etc. and will the Knight Ridder/Mercury News/Nuevo Mundo actually use the full force of its power and wealth for a legal suit against these relatively small and limited budget non-proﬁts if they disobey the above mentioned contract.

This type of business practice has historically garnered ill will among the general population. The local independent publishers who gathered for the meeting last week vowed to spread the word to their readers regarding what appears to be an attempt to stifle alternative and small Spanish language print media outlets.

Freedom to information and equal participation is essential in our system of Democracy.

The notion of diversity is still protected in the United States. Just this last month the San Francisco Independent a free publication owned and published by the Fong family won a judgment against a large San Francisco daily, the Examiner, because of its ‘predatory pricing,’ which if left unrestricted, would quickly have eliminated any competition. Interestingly, that story never appeared in the San Francisco Chronicle or the Examiner.