Although the 2019 Ford Fusion Energi has its share of positive attributes, its low electric range, cramped cargo hold, and ho-hum highway acceleration push it toward the bottom of our midsize car rankings.

The Ford Fusion Energi is an OK midsize sedan. It zips around the city with ease, and it has an impressive list of standard tech and safety features. With the C-Max no longer in production, it’s the last plug-in model in Ford’s lineup. However, as far as hybrids go, others surpass it. Most other plug-in models have a better electric driving range and more cargo space. 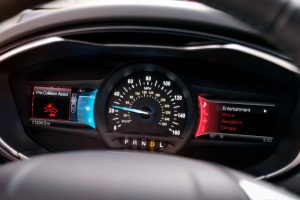 This is an area where the Energi really shines. The tester’s Russet leather-trimmed interior looks inviting against the black plastics and leather trim, and the invitation is worth taking up because the seats are outstanding. We’re talking comfortable and adjustable enough for Mercedes and Volvo levels of praise here. The key touch points are also nice and soft and helps to make the cabin a pleasant place to be for a commute or long freeway run.

In the center sits Ford’s 8-inch touchscreen running SYNC 3 which has come a long way from its first iteration to be a solid and well laid out system although the response time could be a little sharper. The latest version of the Energi’s SYNC 3 also includes Alexa and Waze integration as well as voice-activated navigation and SiriusXM Traffic and Travel Link.

The 12 speaker sound system is solid and played well with everything we threw at it. All the controls are nicely laid out and although you can get into the more granular settings through the touchscreen, everything we needed on the fly is a button press away. As well as in the center stack, controls are mounted on the leather-wrapped steering wheel for the sound system, the cluster display options, and the adaptive cruise control with traffic stop-and-go included. Switching the lane assistance off or on is just a button press on the end of the indicator stalk away and although a dial selector for drive modes isn’t to our taste, it’s simple and logical to use.

There’s nothing really to fault inside the Fusion comfort wise and there’s plenty of room for rear passengers as well. There’s also plenty of storage space, including the deep center console. 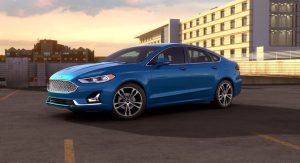 The 2019 Fusion’s facelift is very subtle on the outside and hard to spot. Those with sharp eyes might notice the new grill and LED headlamps and taillights. More importantly for buyers, the facelift also includes the Ford Co-Pilot 360 suite of technologies featuring blind-spot monitoring, lane-keeping assist, automated emergency braking, and automatic high-beam headlamps that are now standard through the lineup.

A lot has been said about the Fusion grill’s design being similar to Aston Martin’s while Ford owned the company, but it always struck us that just slapping a grill from another car on wouldn’t have worked without sculpting the front end around it. To us, the Fusion does remind us of Aston Martin but only in that the shape and silhouette are classic and timeless. During our week with the Fusion, the most common word used to describe it was handsome and a couple of people remarked they liked it because it’s not trying too hard compared with the over-creased looking cars and crossovers with lots of angles they’re seeing a lot. 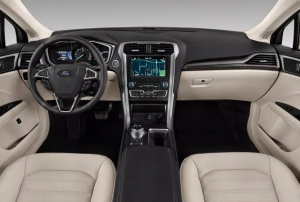 This drivetrain is the reason anyone would choose the Energi version of the Fusion, and its powered by a 2.0-liter Atkinson-cycle engine while the electric drive is supplied by a recently updated 9.0-kWh lithium-ion battery pack. Power is then delivered to the wheels via an eCVT (Electrical Variable Transmission). On electric power only, the Energi is rated for up to 26 miles which is less than half of the most efficient plug-in hybrids on the market.

The Energi boasts 103 mpg with a full battery working with the gas engine and 42 mpg combined on gas only. With the cold weather, we couldn’t quite reach the 103 mpg but were close enough to be pleased with the economy. Driving around town the transition between electric power and the engine is smooth enough not to notice. The battery is also charged using regenerative braking and the display gives you useful feedback about how efficiently you are using that feature as you drive.

Once you stop shaking your head at the lack of trunk space, the Fusion Energi is a pleasure to cruise around in. The suspension is well tuned for comfort and the steering is on the weighty side to help keep things precise and smooth at cruising speeds. Under acceleration, the electric motors counter the extra weight of the batteries well and make the Energi zippy around town. On the freeway, there’s no problem holding speed and there’s very little road noise. Ford has done a great job of making the Fusion Energi not feel like it weighs just under 4,000 lbs.

The adaptive cruise control is smooth and makes stop-start traffic less frustrating while lane-keep assist isn’t too intrusive and brings just the right amount of vibration and urgency to the steering wheel when you drift too far. The driving experience was initially marred by the regenerative braking, and although the feel is very natural at higher speeds it took a bit of driving around the city to learn to bring the Energi to a halt smoothly. Once the brake pedal is mastered, it doesn’t feel like you’re driving anything but a regular Fusion. Helping that is the fact you don’t have to be as light on the accelerator in order to prevent the gasoline engine from coming on when it’s not needed.