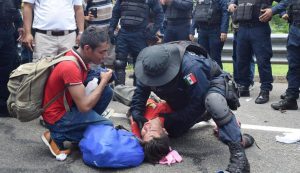 Tapachula, Mexico, Jun 6 (efe-epa).- Despite the Mexican government’s pledge to protect migrants, militarization of border security and rights abuses are a daily reality on the Mexican-Guatemalan frontier, non-governmental organizations and migrants say.


In remarks to EFE, the director of the Fray Matias de Cordoba Human Rights Center, Brenda Ochoa, said the situation amounted to “silent torture” and lamented that “human mobility rights” are being disregarded.


The more than 24 organizational backers of the Observation Mission on the Humanitarian Refugee and Migration Crisis in southeastern Mexico say that more than nine immigration control points have a strong presence of state security forces, particularly Federal Police officers and army soldiers.
They also say that those security forces lack clarity in terms of their roles and authority amid the complex migratory context of recent months in southeastern Mexico, where thousands of mostly Central American migrants have arrived via caravan.


According to these civil society organizations, an attrition strategy is at work that is aimed at sapping the morale of migrants and dissuading them from attempting the northbound journey to the United States. 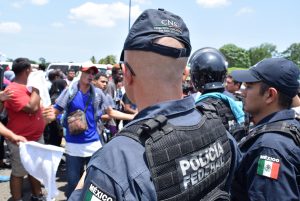 These tactics, they say, are making it more difficult for people to exercise their right to seek asylum and access migratory regularization procedures.
They also are criminalizing migration, even though leftist Mexican President Andres Manuel Lopez Obrador has repeatedly said he understands the root causes that lead people to change countries.


“This has accelerated since the enactment of a National Guard law in recent days” that gives that new public security body “powers that are very similar to those of the National Institute of Migration (Inami),” yet are associated with “the use of force,” Rios said.


The organizations also said that specific groups are discriminated against due to racist and xenophobic practices and that child and adolescent migrants and asylum seekers are deprived of their freedom in migrant centers that are de facto detention facilities.


One such case that exemplifies the hardships suffered by thousands of migrants in southeastern Mexico is that of 33-year-old Cuban citizen Tania Leiva.


Leiva expressed to EFE the plight that she and her girlfriend suffered while being housed along with thousands of other people from different cultures inside the overcrowded Siglo XXI migrant station in the southeastern border city of Tapachula.


The two women, who spent 44 days at the migrant center starting March 22, said that people inside that facility are just “living to survive.”


Poor organization and a lack of information created uncertainty and desperation, leading to riots and breakouts at three migrant stations: Siglo XXI, Comitan and Tuxtla Gutierrez. 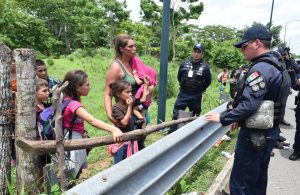 But despite the obstacles and mistreatment they said they received at the hands of Inami personnel upon requesting asylum in Mexico, her American dream remains intact.


“I hope the situation for migrants improves because we want to keep going. We don’t want to stay in Mexico. Our goal is to reach the United States,” she said.


The Cuban couple and two of their friends eventually were among those selected to initiate an asylum process.


Yet despite the hardships and mistreatment they say they have received en route, Leiva says her group is grateful to the Mexican government.


The inexorable flow of migrants has swelled in recent months in Mexico and touched off a diplomatic spat with the US.


Last week, US President Donald Trump threatened to impose a 5 percent tariff starting June 10 on all Mexican imports unless the neighboring country halts the northward flow of US-bound undocumented migrants.


A subsequent statement by the White House laid out a calendar of potential escalating tariffs that could eventually reach 25 percent on Oct. 1 “if the crisis persists.”


Mexico, which sends roughly 80 percent of its exports to the US and has dispatched a high-level delegation to Washington to negotiate a diplomatic solution, on Wednesday intercepted a migrant caravan containing more than 400 people in the southern part of the country.