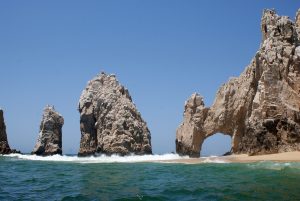 Cabo San Lucas, Mexico, Jun 13 (efe-epa).- The symbol of the Mexican city of Los Cabos, the unique Cabo San Lucas Arch, a rocky formation at the spot where the Pacific Ocean and the Gulf of California meet, is showing cracks in its base due to the passage of time, forecasting its collapse at some undetermined future point.


Los Cabos, in the state of Baja California Sur, is known worldwide for its natural beauty and significant tourist trade. Its southernmost point is the precise spot where the Pacific and the Gulf of California come together and contrasts with the mountainous desert landscape onshore.


It is also called “Finisterra” (Land’s End), given that this is where the Baja California Peninsula comes to an end.


But undoubtedly the most emblematic element of this northwestern Mexican tourist spot is the Arch, which has become a favorite subject for postcards sent by local residents and visitors.


On certain occasions, when the tide is low, it is possible to walk under the curvature on the Playa de los Enamorados (Lovers Beach), which is uncovered when the water level falls. One can usually also see sea lions there sunning themselves on the rocks.


The Arch “is made of … granite: The solid rock is several cubic kilometers in size and what we’re seeing above the ocean is like the tip of the iceberg,” geologist Enrique Nava – a researcher with the Cicimar marine science research center, with the National Polytechnic Institute, based in La Paz, Baja California Sur – told EFE.


The mass of granitic rock is huge and is between 13 million and 15 million years old, he added.


However, in recent years geologists have noticed certain structural changes in the rocky formation and after the latest hurricanes to affect the area scientists have found portions of the rocky cliffsides that have flaked off and cascaded down along the edge of the Arch’s base.


“We already knew it was cracking. That’s due to weather conditions, humidity, the sun, the wind … which creates erosion of the stones. There are cracks inside the structure of the Arch,” biologist and diver Benigno Guerrero told EFE.


He added that this could – over time – cause the Arch to collapse.


In September 2014, Hurricane Odile first made landfall right where the Arch is located and the heavy storm surge caused a drastic change in the site’s ecosystem, removing tons of sand, causing collapses in the structure and wiping the flora and fauna from the zone.


Tourist services provider Fabricio Gonzalez says that the Arch’s importance goes beyond its scenic and historic beauty, given that it provides a key element of the economic activity in the area, attracting tourists from all over the world and providing local residents with a renewable source of work.


Although precisely when a total collapse of the Arch could happen cannot be predicted, some experts feel that another hurricane similar to Odile could bring that about. And whereas that could occur this very hurricane season, it might not happen for hundreds of years, they say.