Guatemala City, Jun 17 (EFE).- Social democrat Sandra Torres and center-right hopeful Alejandro Giammattei were the top two vote-getters in the weekend presidential election and will face other in a runoff to determine who governs Guatemala for the next five years, according to preliminary results released Monday.

Based on results from 97 percent of polling stations, former first lady Torres captured 25.27 percent of the vote, followed by Giammattei – who once ran the prison system – with 13.93 percent, the TSE electoral tribunal said.

Edmond Mulet, a former chief of staff to the UN secretary-general, finished third, with 11.18 percent of the vote. 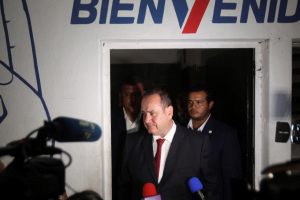 The 696 polling stations where the count is pending include several that witnessed violent incidents during Sunday’s voting.

Under Guatemalan election law, the contest must go to a second round if no candidate wins an outright majority in the initial voting.

The results will remain unofficial until all challenges are reviewed and adjudicated, TSE chair Julio Solorzano stressed.
More than 8 million Guatemalans were eligible to cast ballots in elections to choose a president and vice president, members of Congress and municipal officials.
Turnout was 60.34 percent, the TSE said.

Solorzano, who acknowledged that authorities had to contend with legal and logistical problems in organizing the vote, said towns in eight different provinces experienced election-related violence.

“Nobody has the authority to attack anybody, much less someone who is fulfilling his or her (civic) duty,” the TSE head said, urging the Attorney General’s Office to take all appropriate steps to hold perpetrators responsible for “illicit and irrational” acts.

Two municipalities were forced to suspend voting due to disturbances and the TSE is in the process of deciding whether to re-run the election in those locations.
Making his fourth run for the presidency, Giammattei spent 10 months in preventive detention in 2010 after being accused in connection with a 2006 massacre at a penitentiary near Guatemala City. He was ultimately acquitted.

Torres, who divorced then-President Alvaro Colom in 2011 in order to compete in the election to choose his successor, was excluded from the ballot that year by the courts.

Judges concluded that the separation was a sham to get around the constitutional provision that bars relatives of a sitting president from running for office.

But Torres was allowed on the ballot in 2015 and reached the second round before losing by a big margin to Jimmy Morales, a former television comedian whose presidential term has been plagued by scandal.

Sunday marked Guatemala’s ninth general elections since the start of the democratic era in 1986 with the election of Christian Democrat Vinicio Cerezo as president following several decades of coups, military rule and electoral fraud. EFE