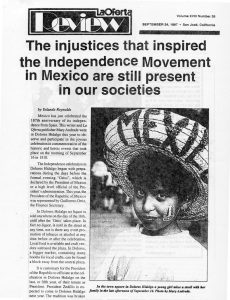 Mexico has just celebrated the 187th anniversary of its independence from Spain. This writer and La Oferta publisher Mary Andrade were in Dolores Hidalgo this year to observe and participate in the joyous celebration in commemoration of the historic and heroic events that took place on the morning of September 16 in 1810.

The Independence celebration in Dolores Hidalgo began with preparations during the days before the formal evening “Grito,” which is declared by the President of Mexico or a high-level official of the President’s administration. This year, the President of the Republic of Mexico was represented by Guillermo Ortiz, the Finance Secretary.

In Dolores Hidalgo, no liquor is sold anywhere on the day of the 16th. until after the ‘Grito’ takes place. In fact no liquor, is sold in the street at any time, nor is there any overt promotion of tobacco or alcohol at any time before or after the celebration. Local food is available and craft vendors surround the plaza. In Dolores, a bigger market, containing many booths for local crafts, can be found a block away from the central plaza.

It is customary for the President of the Republic to ofﬁciate at the celebration in Dolores Hidalgo on the last, or fifth year, of their tenure as President. President Zedillo is expected to come to Dolores Hidalgo, next year. The tradition was broken by the ex-president Carlos Salinas de Gortari. He did not come the last year of his tenure. He had become implicated in the serious scandals that marked his Presidency, the effects of which the country is still attempting to sort out. All of this has had grave consequences for the people of Mexico, their prosperity as well as their sense of trust in government.

In view of the startling events of these past years and the more recent and tentative steps towards a more open “transparent” and democratic government in Mexico, this year’s Independence celebration seemed to re-inforce the determination of the celebrants to make the objectives of that time; for justice, self-governance, respect and dignity an everyday reality and not just the quaint ideals of a few courageous leaders who, long ago, decided that the government of that day (under ‘the Spanish Crown) had become unbearable and that the only alternative to such conditions was open rebellion.

The two museums in Dolores Hidalgo were each visited by streams of school age youngsters and other visitors, who attentively listened to the docents explain the events leading up to and following the call for Independence. One museum, Museo de la lndependencia Nacional, has some very important information which details the events that led the colonists and the local indigenous communities to seek their independence from Spain.

The other important museum is the Museo de la Casa Hidalgo. For this visitor, it was at this museum where the memory of the priest Miguel Hidalgo came alive, with words that apply today as well as they did almost two hundred years ago. It is as if he were here today, observing the empty words of officials and even religious leaders who take refuge in the trappings of their positions to feign honorable character while they, in fact, abuse and take advantage of others.

Don Miguel Hidalgo was especially critical of the treatment of the local indigenous communities, the Otomí and Chichimecas who worked in the mines and haciendas, who were treated essentially as slaves by the rich agricultural and mining interests. In those days, those who were of Spanish descent but not born in Spain were identified as “criollos” and were denied positions of authority. Only those born in Spain and known as ‘peninsulares’ or more derisively as ‘gachupines,’ could win assignment to any government post.

Don Miguel Hidalgo y Costilla was the son of a criollo hacienda manager in Guanajuato who, early on, chafed at the caste system in which he lived. Don Miguel studied at the College of San Nicholas Obispo in Morelia. Mexico, then known as Valladolid. He became a Catholic priest but found fault with some of the Church’s teachings, such as the notion of the virgin birth and the infallibility of the pope, and was outspoken in his opinions. He enjoyed gambling and fathered several children, but always enjoyed the full respect of the people.

In some of the murals that depict this period of history, Hidalgo appears, to this writer, to be portrayed as a driven perhaps even a mad man. He is shown as a man with shoulder length sparse white hair and a balding forehead, who is dressed in black with his clerical white collar clearly visible and wearing black riding boots, as he leads a mass of townspeople, mostly Mestizo and Indigenous, into battle against the loyalists and as well armed Spanish forces.

Actually, photos and other, less often seen, portrait painting reveal Hidalgo to have been slight and with delicate features of a thoughtful visage appropriate to his well-reasoned and inspiring words that have resonance today. He spoke against the inequality of opportunity of that day, the hypocrisy of political leaders who claimed their religious fervor in words and not in deeds and the complicity of church leaders in this charade. He believed in the well-being of people while on earth and not just for their eventual reward in heaven and worked very hard to improve the quality of life for all.

Hidalgo’s ideas caused him to be removed as a rector of his alma mater and sent to the small, remote town of Dolores Hidalgo. He became a co-conspirator with those who chafed at the arrogance and abuse that the people suffered under Spanish rule. He, along with Ignacio Allende, Juan de Aldama, Jimenez, Abasolo and the Corregidora Josefa Dominguez had planned the armed uprising to begin in Queretaro on Dec. 10, 1810, but the plot was discovered by the loyalists several months ahead of time. This forced Hidalgo to immediately announce, at 5 a.m. on the morning of September 16, 1810, on the steps of the entrance to the church, the Parroquia de Nuestra Señora de Dolores, that the rebellion had begun.

Hidalgo is reputed to have said that morning, “Viva our Lady of Guadalupe! ¡Death to bad government and the gachupines!” Before going to the church, it is said that Hidalgo took his gun and visited the jail where, at gun point, he made the jail guard release all of the prisoners who gladly joined their beloved and trusted padre in the search for independence. After declaring the rebellion, it is said that Hidalgo escaped capture by disappearing into a tunnel, when he returned to his home to lead the rebels in taking prisoners the local representative of the Spanish Viceroy.

Hidalgo and his motley, but loyal followers, then embarked on what is known today as the Ruta de la lndependencia, where they helped San Miguel win independence. That was followed by successes in Celaya and then Guanajuato.

One month later, Hidalgo and his coconspirators were captured and executed by the loyalists and Spanish troops. Their heads were severed and taken to Guanajuato where they hung in metal cages at each corner of a need and grain warehouse, La Alhondiga de las Granaditas, that, by then, had become a Spanish military fortress. Their heads remained there until total independence was finally won in 1821. The Alhondiga is today a museum that contains fascinating relics of the past, as well as exhibits of ﬁne arts currently created by local artists. In it can be found the majestic murals by Jose Chavez Morado that depict their struggle for independence.

Don Miguel Hidalgo is fondly credited for introducing a number of crafts and trades into the area as a way for the people to escape the slave like conditions under which they lived. He introduced new techniques for the making of ceramics and pottery, weaving, metal and foundry works, carpentry and furniture making as well as an expanded array of agricultural food stuffs. These trades and crafts are still important and provide a major economic base for this community.

Today, Dolores Hidalgo is famed for the distinctive pottery ‘talavera’ and the ironwork produced in that city.

San Miguel de Allende is renowned for its beautiful setting, enhanced by cobbled and curvy streets that lure the pedestrian. In walking about it is hard to stop, since walking past just one more curve will reward one with another exquisite view, the sight of a delightfully colorful home or of a fascinating doorway that should not be overlooked.

Guanajuato has been declared a World Treasure by UNESCO. That designation has inspired the restoration of many of the City’s very beautiful treasures. The churches, the granary, the cobbled streets are all in perfect condition. This city was built by the gold and silver mining barons of the middle 18th and 19th centuries and reflects the incredible wealth that was amassed in those days.

The lndependence movement in Guanajuato was partially driven by the increased mining taxes demanded by the Spanish Crown which outraged the local gentry. The Mexican criollos, like their American counterparts of 1775, rebelled against arbitrary tax regulations that had been imposed by the mother countries on their colonies.

The Independence celebration was especially moving, perhaps because of the reverence and respect that was so obvious on the art of the townspeople and their fellow Mexicans on that day of remembrance. Those who made the pilgrimage to Dolores Hidalgo to savor the full meaning of that ‘Grito de lndependencia’ that was declared 187 years ago to throw off the yoke of tyranny and injustice, seemed to personally renew their commitment to the ideal enunciated by Miguel Hidalgo for the people of Mexico. © La Oferta Newspaper.