Activists from three different organizations staged a sit-in outside La Modelo prison a day after a deadline passed for the release of political prisoners under a pact between the government and opposition.

The Ortega administration said Monday that it was no longer holding any of the people arrested in connection with a wave of anti-government protests that began in April 2018. 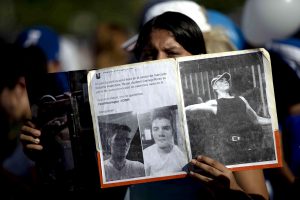 The last of the political prisoners whose names appeared on the “agreed list” were freed last week, the government said.

But a spokesman for the Civic Alliance, Juan Sebastian Chamorro, accused the government of “truculence” and of defaulting on the accords reached during talks that extended from February through April.

Dozens of mothers and other relatives of detainees took part in the protest, chanting slogans that included references to Ortega as a criminal.
Nicaragua’s National Police show little tolerance for demonstrations that target Ortega and a score of prison guards stationed themselves outside the main gate of La Modelo on Wednesday to keep protesters well away from the facility.

The political crisis in Nicaragua began with protests against proposed changes to the pension system. Though the government dropped the plan, demonstrations continued with the aim of forcing Ortega to step down.

The Inter-American Commission on Human Rights said that 326 people died in politically motivated violence and put the blame on security forces, accusing them of crimes against humanity.

Organizations inside Nicaragua put the death toll at nearly 600, while the government acknowledges 200 fatalities.

Re-elected in 2016 with more than 70 percent of the vote, Ortega maintains that the anti-government protests constituted an attempted coup. EFE