Miami, Jun 18 (EFE).- Vice President Mike Pence on Tuesday renewed the “firm” commitment of the Donald Trump administration to Venezuela’s “legitimate” president, Juan Guaido, and the Venezuelan people and thanked other Latin American countries for their “generosity” in helping defend the cause of freedom in Venezuela.


The US government stands “with our neighbors … We will continue to stand strong until freedom, democracy and the rule of law are restored” in Venezuela, Pence said on a visit to the US Navy hospital ship USNS Comfort at the Port of Miami, a vessel which on Wednesday will set sail on an 11-country tour of the Caribbean, Central and South America, the ship’s second visit to the region in the past six months.


Pence said he was happy to visit Miami “for the departure of the USNS Comfort, bringing the compassion of the American people to those suffering here in our hemisphere and around the world.”


Over the next five months, the USNS Comfort will continue America’s effort to “bring desperately needed medical care to those in need … especially the men and women and children who are suffering under the unprecedented crisis and oppression in Venezuela,” said the vice president, who was accompanied by his wife Karen.


The aim of the ship’s mission is to help the countries of the region deal with the healthcare challenges posed by the displacement of millions of Venezuelans who have fled their country to escape the “misery and oppression” there, said Pence at a press conference at the port. 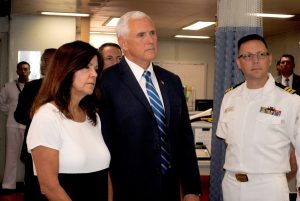 According to United Nations figures, more than four million Venezuelans have abandoned their country because of the severe political and economic crisis there, and that has put pressure on the healthcare systems of the countries in the region that have taken them in.


Also accompanying Pence on his visit to the hospital ship and the port were Southern Command commander Adm. Craig Faller, Health Secretary Alex M. Azar and Guaido’s representative to the US, Carlos Vecchio.


Guaido has been recognized by more than 50 countries, including the US, as Venezuela’s legitimate president, and Pence said that the US is “proud” of the fact that Washington was the first country to recognize him in that capacity.


Interspersing his remarks with Spanish phrases and words and paraphrasing the words of Latin American liberator Simon Bolivar, Pence sent a clear message to Venezuela’s elected president, Nicolas Maduro, referring to him as a “dictator,” and also to the Cuban government.


He said that the Trump administration is committed to backing Guaido and will continue bringing diplomatic and economic pressure to bear to isolate the Maduro regime and drive it from power.


He also said that the Cuban regime would continue to feel US pressure not to block the road leading toward freedom in Venezuela, adding that international “observers” say that Havana is helping Maduro remain in power by providing personnel and materials of various sorts.


Pence also praised countries such as Colombia, Peru and Ecuador for taking in many thousands of displaced and desperate Venezuelans – in Colombia’s case “1.3 million” – and for showing “concern” and “compassion” for them.


The vice president sidestepped questions from reporters about the possibility of US military intervention in Venezuela and said only that “all options are on the table” for restoring the rule of law to the country.


Vecchio, meanwhile, said that “Maduro has created the biggest humanitarian crisis in all the Americas. He’s not only a threat to Venezuela but to all of the Americas,” and he thanked both Trump and Pence, for working to resolve the Venezuelan crisis, “getting Maduro out and reestablishing democracy.”


Pence and his wife on Tuesday evening will attend the political rally Trump will hold in Orlando, Florida, at which he will announce his 2020 re-election campaign.


The USNS Comfort can carry a crew of up to 1,000 doctors, nurses and medical specialists, has capacity to treat 1,000 patients with an 80-bed intensive care ward, a 20-bed recovery ward, a 280-bed intermediate care ward and 12 operating rooms.