New York, Jun 19 (efe-epa).- Urban art was born in New York in the 1970s and is now recognized all over the world as a “movement” that continues to grow and expand, and the Big Apple is assembling an exhibit of the work of more than 150 artists of the genre ranging from the UGA group to Futura 120 and Basquiat.


“Beyond The Streets” opens on Friday in Brooklyn’s creative district, where the paintings will be on display through the end of August in the 9,300 square meters (more than 100,000 square feet) of two “lofts” in an industrial building with the aim of continuing to “legitimize” this art form, the exhibit organizer, Roger Gastman, said. 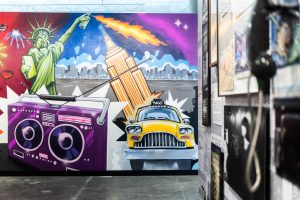 Gastman, a historian of graffiti who co-produced the documentary nominated for an Oscar about the artist Banksy titled “Exit Through the Gift Shop,” on Wednesday surrounded himself with a number of artists whose work will be on display for the media presentation of the exhibit and admitted that the public has these days become “educated” about a movement that began as mere vandalism.


The origins of urban art can be traced back to the development of US railroad lines starting in 1830, when rail workers left their marks on railroad cars and “stowaways” who illegally boarded freight cars copied the custom, although graffiti per se only burst onto the scene during the 1970s in the New York subway.


One of the “artists,” then a teenager, Jose Eduardo Colon – alias JEC? – still remembers “how it was back then,” telling EFE that in 1968 the Big Apple was being lashed by a heroin epidemic and one way to avoid that world was through sports, but he and his friends from the “barrio” preferred to escape by creating their illicit artwork on walls around town, signing their creations with their “tags,” or nicknames.


Later, in 1972, JEC? became part of a group known as United Graffiti Artists (UGA), saying “We’re known as the pioneers of graffiti and the most famous of us was TAKI 183. It wasn’t art, it was just (done with) a black marker and that’s it.”


He showed photographs of the teenage group and their scrawled artwork that was considered vandalism by the authorities and much of the public at the time. 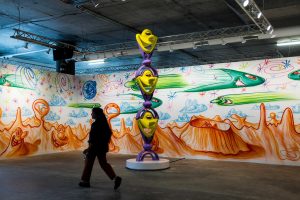 The UGA got together again recently to write a book – “The History of American Graffiti” – with Gastman as co-author, and to film a documentary that took them to Europe, but JEC?, now a retired transport worker in Florida, said that what today is considered art used to be just a way to “mark our territory and get a laugh.”


Nearby, an enormous horizontal graffiti drawing signed by Lee Quiñones recreates one of the first such works he painted at age 15 on the side of a train in 1975 and is a “tribute” to the rich popular culture of that time, when Motown sounds were playing everywhere.


“There’s been a natural transition for a movement of this caliber. It’s grown from its nucleus in New York to be the biggest artistic movement in the world,” the artist said, adding that urban art will continue being just that because young people often consider it a platform in which to “find a voice.”


Other artists and graffiti groups whose colorful work will be on display at the exhibit include Future 2000, and the late Keith Haring and Jean-Michel Basquiat, the latter better known as SAMO.