Tiahuanaco, Bolivia, Jun 21 (EFE).- Bolivia on Friday marked the Southern Hemisphere winter solstice – and commemorated the beginning of Year 5527 on the Andean calendar – at this western archaeological site near Lake Titicaca and elsewhere in the Andean nation.

The celebrations were held a day after the United Nations recognized June 21 as International Day of the Celebration of the Solstice.

In a speech, President Evo Morales, a member of the Aymara community who is Bolivia’s first indigenous president, hailed the solstice resolution adopted the day before by the UN General Assembly.

Morales noted that that text had been introduced jointly by Peru, Ecuador, Chile and Bolivia, who share an indigenous ancestral tradition.

Bolivia’s winter solstice celebration, known as “Willka Kuti” (the return of the sun, in Aymara), was highlighted by a ceremony at the Tiahuanaco archaeological site, which is located 80 kilometers (50 miles) west of La Paz and has been inscribed on UNESCO’s World Heritage List since 2000.

Similar celebrations also were held at nearly 100 other sites in different Bolivian regions, including the inter-Andean valleys, the Amazon and the Chaco semi-arid plain.

A large “wajta,” or table, with symbolic elements such as small figures representing prosperity and llama fetuses was prepared in honor of Pachamama and then set on fire.

The climax of the festivities came when hundreds of people gathered for the ceremony, including Morales, received the first rays of sunlight with the outstretched palms of their hands, an action that symbolizes the taking in of good energy at the start of a new Southern Hemisphere agricultural cycle. 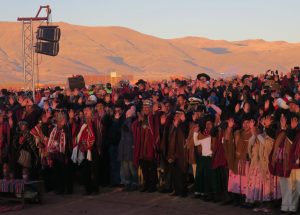 The president was accompanied at the ceremony by his foreign minister, Diego Pary; culture minister, Wilma Alanoca; and the presidents of the Senate, Adriana Salvatierra, and lower house, Victor Borda.

The celebration also marked the transfer from Argentina to Bolivia of the leadership of the Secretariat Pro Tempore of the Qhapaq Ñan, the Quechua name for an ancient road system that reached its maximum expansion between the years 1450 and 1530 A.D., at the height of the Inca Empire’s expansion.

Bolivia will hold that position until 2021.

Hundreds of people, mainly members of indigenous communities and tourists, had already gathered in Tiahuanaco on Thursday.

The Andean calendar adds an estimated 5,000 years of Andean history to the 527 years since Columbus landed in the Americas in 1492.

In 2009, Morales’ administration dubbed the celebration “the Andean-Amazonian New Year” and decreed June 21 to be a national holiday. In 2017, Bolivian authorities brought the Chaco region into the sphere of the winter solstice celebrations.

During his 13 years as president, Morales has celebrated the Aymara New Year in Tiahuanaco, as well as at Fort Samaipata in the eastern region of Santa Cruz, the Uyuni Salt Flats in the southwestern province of Potosi and in his home town of Orinoca, in the western province of Oruro.