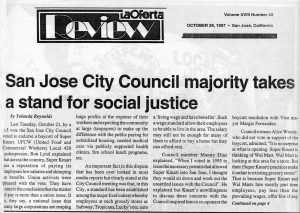 Last Tuesday, October 21, by a 6-5 vote the San Jose City Council voted to endorse a boycott of Super Kmart. UFCW (United Food and Commercial Workers) Local 428 spokesperson, Ron Lynd explained that across the country, Super Kmart has a reputation of paying its employees low salaries and skimping on benefits. Union activists were pleased with the vote. They have come to the conclusion that the matter of pay is more than a union issue. It is, they say, a national issue that many large corporations are reaping huge profits at the expense of their workers and expecting the community at large (taxpayers) to make up the difference with the public paying for subsidized housing, needed medical care via publicly supported health clinics, ﬁre school lunch programs, etc.

An important fact in this dispute that has been over looked in most media reports but clearly stated at the City Council meeting was that, in this City, a standard has been established among the major food outlets where by employees at such grocery’ stores as Safeway, Tropicana, Lucky’s, etc. earn a ‘living wage and have benefits’. Such a wage standard, allow their employees to be able to live in the area. The salary may still not be enough for many of them to afford to buy a home but they can afford rent.

Council member Manny Diaz explained, “When I voted in 1995 to, issue the necessary permits that allowed Super Kmart into San Jose, I thought they would sit down and work out the unsettled issues with the Council.” He explained but Kmart’s unwillingness to, discuss these concerns with the Council inspired him to co-sponsor the boycott resolution with Vice mayor Margie Fernandez.

Councilwoman Alice Woody, who did not vote in support of the boycott, admitted, “It is no surprise at what is opening. Super Kmart is thinking of Wall Mart. Wall Mart is looking at this area for a store. But their (Super Kmart) practices make it unfair to existing grocery stores.” That is because Super Kmart and Wall Marts hire mostly part time employees, pay less than the prevailing wages, offer few if any beneﬁts, and aggressively discourage the unionization of their workers. The local need for decent wages and beneﬁts became painfully obvious in recent years when the union leadership began the janitors campaign. Until the mid-eighties, janitors were relatively well paid company employees of the companies that needed their labor. As the notion of letting the “market place” determine salaries and beneﬁts became the new mantra, companies decided to make “efficiencies” and, as part of that policy, cut their janitorial jobs. Their work was then contracted out to janitorial service companies who became involved in bidding wars at the expense of the workers.

Mayor Hammer, in stating her support of the union’s boycott, explained that the City has spent ten’s of millions of dollars in infrastructure improvements to support business and that it was now time for them “to stand tall and support low paid workers.”

She added that, in discussions with Super Kmart officials at the time of the permitting process on obtaining permission to open their store on Story Rd., she was lead to believe that they would be “good corporate citizens.”

She explained, “I thought Kmart would respect the culture in San Jose but it (Super Kmart) been unable to listen.” She stated, “I have never seen a business as big as they are to be so intransigent in my 15 years on the Council.”

Housing and homeless advocate Sandy Perry pointed out that a great number of the homeless people (and people in need of housing assistance) in this area work hard at full time jobs but are not paid a livable wage.

The San Jose Metropolitan Chamber of Commerce vigorously opposed the proposed resolution, saying that the City ofﬁcials would be sending an anti-business message to businesses considering a move to San Jose or could even send others packing themselves elsewhere. Among those speaking in opposition to the boycott resolution were, Steve Tedesco President of the San Jose Metropolitan Chamber of Commerce. Tommy Fulcher, the first American of African ancestry to Chair the San Jose Chamber, and Terry Feinberg spokesperson for the Tri-County Apartment Owners Association.

Cindy Chavez, a labor advocate, researcher and organizer says that businesses “come to San Jose for many reasons.” “They are,” she says, “the universities; San Jose State, Santa Clara University, Stanford and nearby Berkeley and this is a nice place to live.” “There also exists”, she explained, “a relatively excellent infrastructure system of freeways, rail transportation, and three major airports in the Bay Area.”

Chavez concludes, “Big business is trying to blow this out of proportion and for them to stand up with Super Kmart will only serve to lower the (compensation) standard for the area.”

Some questioned the targeting of Super Kmart since other businesses also failed to pay prevailing wages and beneﬁts. Chavez responded that Super Kmart’s was signiﬁcant, since its personnel practices would lower the standards already established in the area. Most mid to large size grocery stores in San Jose adhere to the prevailing compensation standard. To ignore Super Kmart‘s personnel practices would give them an unfair advantage over their competitors, who do respect decent treatment and open dialogue with their employees.

Ron McPhearson of the Black Chamber of Commerce reminded the Council of the promises made for support of the $150+ million local sports arena, which to date, does not award any contracts to local and small minority businesses for services needed by that operation. He suggested that Super Kmart would be left alone if it did, indeed, pay its workers prevailing wages and beneﬁts. The Kmart Corporate Head is ‘reported to have been paid $11.4 million last year. Super Kmart’s across the country and elsewhere in California have earned a negative reputation because of their unjust personnel policies.

Counterclaims that unions are corrupt and only want the dues union members must pay has resonance with some people. It is a fact, however, that it took a courageous and life threatening action by workers in the early 1900’s to bring about safe working conditions and decent’ pay for workers in this country. The lives that were lost in that struggle would be wasted were unions not to have the moral support of political leaders in matters of employee rights and on such an important issue of social and economic justice.

Religious leaders spoke on behalf of working people and in support of the boycott. Among the speakers, Father Eugene Boyle eloquently expressed his belief for the dignity of working people and the moral responsibility to respect people’ s work and their obligation to conduct business fairly.

In response to La Oferta in regard to the statement by Chamber Executive Steve Tedesco that the City, has no business commenting on private business matters, long-time community advocate Rena Modell, says, “Then all of those corporations which have received ‘incentives’ (taxpayer money) from the Redevelopment Agency (City Council) should return that money.”

As for the Chamber Board Chairman, some say that Fulcher should first state that he has a conflict of interest since the non-proﬁt that he works for exists to serve poor people.

Super Kmart does not reveal what it pays its workers. Union activists have been able to ascertain that approximately 70% of its workers are part time, which means that few. If any, receive beneﬁts. One Super Kmart employee told the Council, that as a full-time employee and a single mother of three children she had been able to recently buy a home. Though she did not reveal her hourly salary, it is well known that the average home price in San Jose is near $300,000. Interestingly a majority of the Super Kmart employees at the meeting appeared to be young and female.

One 60-year-old man pled with the council not to support the boycott from fear that the store would close (a usual anti unionizing threat) because he relied on his salary from Super Kmart to supplement his retirement income from Social Security.

Super Kmart management refused to counter union charges with factual store personnel data nor will they allow union organizers an opportunity to talk to the workers at the store.

Super Kmart brought three large bus-loads of people to the Council meeting. The store’s manager admitted that the employees were paidto attend the meeting. Though numerous Super Kmart employees spoke, they never stated what their hourly or weekly salaries were or any other details regarding beneﬁts or other Super Kmart personnel policies. In an exchange with the Mayor, the local Super Kmart manager, he refused to say that he would allow union leader Lynd and his union members to poll

the worker’s interest in establishing a union at that store without interference. Lynd promptly agreed to abide with policies established by the NLRB for such activity. Super Kmart was cited, in another city, by the NLRB for not allowing its meat workers to bring representation to the bargaining table. Kmart agreed to a settlement in that dispute.

Labor spokesperson Cindy Chavez says that the next step for the Union is to inform the community of the importance of the stand taking by the 6 members of the Council who voted for the resolution in support of the boycott. Those council members were, Mayor Susan Hammer, Margie Fernandez, Manny Diaz, Charlotte Powers, John DeQuisto, and Trixie Johnson.

For more information on this matter contact Cindy Chavez at 266-3791 or your City Council representative. at 277-4241. © La Oferta Newspaper.