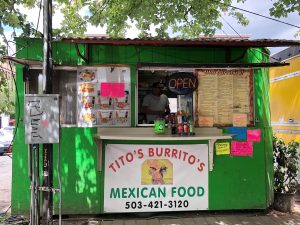 Portland, Oregon, Jun 22 (efe-epa).- Regardless of whether cooks who make salsa, tacos, Moroccan cake or paella are immigrants, Americans love their cuisine and leave aside all the hatred and resentment stirred up by certain politicians against the waves of migrants.


What everyone knows is that US citizens will never give up cuisines from across the seas and will certainly refuse to survive on barbecues and fast foods.


Francisco Castañeda, a native of Mexico and owner of a food cart of dishes typical of his country, told EFE that this is “a good way for us to interact with them and also for them it’s a way to communicate with us.”


“Our food is something we know they like,” added Castañeda, manager of one of the busiest places in the famous gastronomic city of Portland, Oregon.


But this kind of interaction, fully accepted and in which both groups enjoy excellent relations, helps foreigners integrate, since with a succulent dish with Mediterranean aromas, the US customer won’t even think about where the chef came from, and even less about having the person deported.


A lady who routinely buys Greek dishes from a food cart said of that cuisine, “It’s just so good. I mean it’s different” and in her opinion is better than typical American food.


This love for previously unknown flavors has become something of universal interest, as indicated by the number of TV programs covering the delights of the kitchen.


Oddly enough, this is something more to be found in the US, according to a recent study by the YouGov company, taken together with seven European countries.


Of the 1,200 people asked in the US, 50 percent said “food” was what the country gains most from immigration, while 43 percent said that local businesses and economies were the segments most favored, while 42 percent named culture.


The survey said that, even with a government with zero tolerance for the undocumented, the US is the country that most favors immigration. The poll noted that one out of every four Americans believes that foreigners do more good than harm.


But US chefs and restaurateurs are also enriched by the cultural exchange.


Nate Thilen, one of Portland’s most important restaurateurs, owner among others of the Bar Casa Vale restaurant, said that immigration is incredibly important for US cuisine.


Food and culture are transported into this country by immigrants “bringing their history, their ideas, their family lineage, things that we don’t know about yet, and they’re bringing them to where we live and sharing them with us. And that’s how we learn,” he said.


“If we kept everything internal and never looked outside then we would just be in a perpetual cycle and wouldn’t go anywhere,” said Thilen, an American inspired by Spanish tapas.


Also the owner of the Provision Foods delicatessen, Thilen thanks foreigners for helping him be “passionate about where I come from.”


“We’ve got wonderful oceans and mountains, pastures, produce and farmlands that are amazing. And seeing my land through their eyes, I understand my place better,” he added 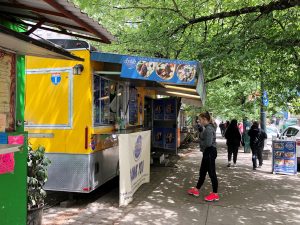 Javier Canteras, born in Bilbao, Spain, and whose parents emigrated to the US when he was 5 years old, is the chef and proprietor of the Basque restaurant Urdaneta.


His idea about the total of dishes from other latitudes is based on getting Americans to give up their bad eating habits, which seriously affects their health.


“In my restaurant, that’s what we do. People that come here and they eat, we keep them here for two or three hours. And you have to sit here…and it’s good food and it’s healthy. It’s local. So we try to impart that mentality. We’re educating people on the traditions of Spain,” Canteras said.


Aside from love, food is the most universal silent language, said the chef, who believes his responsibility is also to educate his customers about Spanish traditions and show them what they can find in the Basque Country or in Andalusia.


“People take trips to Spain and then come back to the restaurant later and just say, ‘you were so right,'” Canteras said.


Americans in general accept the benefits of immigration to their diets and, according to the National Restaurant Association, 29 percent of the restaurant business is run by immigrants.