Mexico City, Jun 24 (EFE).- The Mexican government is dealing with the mass of sargassum seaweed piling up on its Caribbean beaches as a problem of state for which no private companies will be contracted to resolve, the secretary of the country’s navy said Monday.

In a press conference with President Andres Manuel Lopez Obrador in the Caribbean resort city of Cancun, Adm. Jose Rafael Ojeda said that later Monday he will meet with Quintana Roo state Gov. Carlos Joaquin Gonzalez and with the state’s mayors to determine which municipalities are first in line to attack the problem.

The secretary said that 995 kilometers (620 miles) of coastline are affected, but added that the seaweed “isn’t a problem, it’s a situation” currently occurring in several countries. 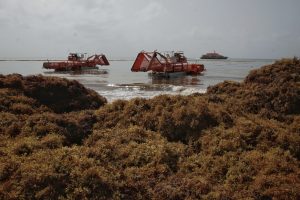 He said the navy department has 52 million pesos ($2.7 million) for handling the contingency.

He added that the department will be building boats to collect the seaweed at an estimated cost of 6 million pesos ($308,483) each, and that the first one will be ready in approximately two months.

“With 10 or 12 of them, plus the barriers we’re buying, we’ll really be able to attack the sargassum invasion. The state will have its own equipment and personnel.

We’ll deal with it as a problem of state, not as a business. We’re not going to contract private companies,” Ojeda said.

The admiral added that the navy is also taking steps to purchase and bring to Quintana Roo a sargassum-collecting boat that was abandoned in Ensenada on Mexico’s Pacific coast.

He also noted that universities and the National Science and Technology Council (Conacyt) are studying how to use the seaweed once collected, since “we have no real diagnosis about what to do” with the algae.

He added that meanwhile four navy boats are being used to collect the sargassum, which have had good results even though they’re not designed for such work.

For his part, Lopez Obrador said “the sargassum is a minor issue.”

Nonetheless, the president gave assurances that “the matter will be resolved.”

Massive amounts of seaweed have washed up this year on Mexico’s Caribbean coast, which includes some very important tourist attractions like Cancun and Playa del Carmen.

Scientific research has found that higher seawater temperatures and the dumping of organic material in Central American rivers are what speed up the algae life cycle and reproduction.

Experts have predicted that the amount of sargassum washing up on Mexico’s beaches in 2019 will be considerably larger than last year, when a then-record invasion of 170,000 tons of seaweed kept thousands of tourists off the sands.