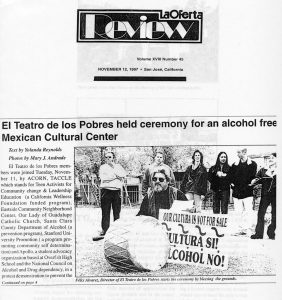 El Teatro de los Pobres members were joined Tuesday, November 11, by ACORN, TACCLE which stands for Teen Activists for Community change & Leadership Education (a California Wellness Foundation funded program), Eastside Community Neighborhood Center, Our Lady of Guadalupe Catholic Church, Santa Clara County Department of Alcohol (a prevention program), Stanford University Promotion (a program promoting community self-determination) and Apollo, a student advocacy organization based at Overfelt High School and the National Council on Alcohol and Drug dependency, in a protest demonstration to prevent the intended sale or use of alcoholic beverages at the soon to be built Mexican Heritage Plaza and Gardens (MHPG). The protest took place at noon Tuesday November 11 at the comer of King and Alum Rock.

The group led by El Teatro de los Pobres and spokesperson Felix Alvarez began the blessing ceremony demonstration on the grounds of the nearby San Antonio Elementary School from where they gathered in the comer end of the San Antonio School grounds, adjoining the Mexican Heritage Project area.

The City of San Jose prohibits the sale of alcohol in areas within 500 feet of school, churches and day care facilities. A fence separates the MHPG from San Antonio Elementary School. Councilman Manny Diaz, the council representative of District 5 said that his ofﬁce would carefully monitor all applications for liquor permits and to the extent possible the transfer of existing permits in his district and in particular in this area, where there is

a very high concentration of liquor outlets. His Chief of staff, Tony Arreola, said that Diaz was planning to recommend extending the distance allowable for the sale of alcohol from 500 feet to 1,000 ft. for further protection.

So far, discussions with the Mexican Heritage Corporation President and Board (the nonprofit organization responsible for the Plaza and Gardens), have not brought about a change in their intended sale or use of alcohol. Discussions have not ended altogether. The community is awaiting a formal request made several weeks ago to band the sale or use of alcohol at the Cultural Center.