San Luis Talpa, El Salvador, Jun 28 (efe-epa).- The Salvadoran Tania Vanessa Avalos, wife of the young man who died last Sunday together with their daughter in the Rio Grande, returned this Friday to El Salvador to await the arrival of their bodies from Mexico.


Avalos left Thursday from the Matamoros municipality in the northeastern Mexican state of Tamaulipas, together with the bodies of her husband Oscar Martinez, 25, and their 2-year-old daughter Valeria, on her way to the city of Monterrey in Nuevo Leon.


The young wife, who was rescued from the waters of the river dividing Mexico from the United States, arrived accompanied by the Salvadoran consul in Monterrey, Rafael Rosales.


Rosales told a brief press conference, at which Avalos was present and where the media were not allowed to ask questions, that the bodies of the deceased are being transported by road to El Salvador. 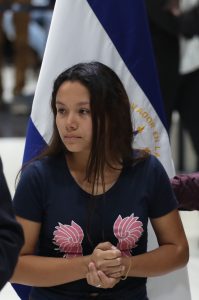 “The decision was taken to go by road because it’s much faster and much more direct,” said Rosales, adding that highway transport will make sure that “better care is taken of the bodies.”


He noted that transporting them by air would be “a little harder and would take longer,” since commercial flights consider coffins to be “cargo” and make a number of landings before reaching El Salvador.


Avalos, who gave no statement to the press, was received at San Oscar Arnulfo Romero Airport in the southern town of San Luis Talpa by the vice minister for Salvadorans abroad, Mauricio Cabrera.


“From the Foreign Ministry we have taken steps to provide healthcare and psychological support, since we know her loss is very great, and Señora Avalos needs all our attention,” Cabrera said.


Salvadoran authorities have not specified when the victims’ bodies will reach the country for their burial in a cemetery in the capital.


Avalos told Mexican authorities that when the current caught the little girl, her father tried to rescue her, but both were swept away by the river and they disappeared.


The family had gone to Matamoros to seek political asylum in the United States, but they became desperate because the procedures were going so incredibly slowly, so they decided to cross the Rio Grande with other migrants, she said.


Over the last few days, the image of father and daughter’s tragic death caught international attention and reflected the desperation of Central American migrants who cross Mexico with hopes of reaching the United States.


The heartbreaking photo shows the bodies of Oscar and his daughter Valeria face down on the Mexican side of the river.


In recent months the migratory crisis on Mexico’s northern and southern borders has intensified after the United States issued an ultimatum to the country to stop the flood of migrants.


El Salvador authorities say that among the reasons for so many undocumented migrants is that they are looking for a better life, they want to reunite their families and escape the violence of the street gangs in their home country.