Manta, Ecuador, Jun 30 (EFE).- Fish is known for the quality of its protein and its rich content of Omega 3 fatty acids but most of the micronutrients are in parts of the fish that are thrown away, the United Nations Food and Agriculture Organization, which is looking into ways to salvage these nutrients, warned.


“People talk about fish in general as a source of protein, but I like to put emphasis on the other nutrients that differentiate it from other types of ocean meat products,” Jogeir Toppe, an official with the FAO’s subregional Fisheries and Aquaculture Department office for Central America.


He made his remarks at a forum on marine sustainability held recently in the Ecuadorian coastal city of Manta, where participants discussed assorted questions linked to the fishing industry, as well as the nutritional properties of fish.


Numerous studies show that tuna and other fish are an important source of Omega 3 oils, which are essential for maintaining good brain function in humans. 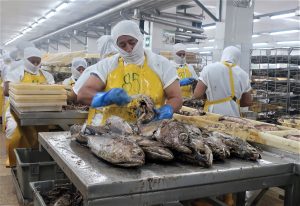 According to research in that area, consuming fish proteins reduces by 36 percent the risk of dying from coronary disease and strengthens the amounts of DHA and EPA acids, which are the types of cerebral Omega 3, in the body.


In addition, the research has found that mothers who eat a diet rich in fish during their pregnancies have babies who at age 5 have IQs that are six points higher than other children whose mothers did not consume fish during pregnancy.


“The major component of our brain is DHA, a long-chain Omega 3 that is found in fish,” said the FAO representatives, emphasizing that “the big challenge” from the nutritional point of view is micronutrient deficiency, a situation affecting 30 percent of the world’s population.


He said that about three billion people have deficiencies of iron, vitamin A, iodine and zinc, all of which are found in large proportions in fish products albeit “in some (products) more than in others.”


The parts of fish that are most widely consumed are the filets, although they don’t necessarily contain the bulk of the nutrients, a fact that is not widely known because other portions of fish have never been consumed in many cultures around the world.


Toppe said that the scanty nutritional information about fish byproducts that are not consumed indicates that they can contain very elevated levels of essential micronutrients: “We’re talking about 10, 100 and up to 1,000 times higher than in the filets, and they’re not being taken advantage of.”


Those parts generally includes the head, the spinal column and the viscera, which contain a wide variety of nutrients although – in the majority of cases – they are converted by the fish processing industry into fish meal for non-human use.


In addition, these parts represent between 50-90 percent of the total weight of the fish, and calculations are that between 30-70 percent of the prime material is eliminated during processing.


Given these data, the FAO has developed pilot projects in Peru and Africa that incorporate products especially prepared using fish byproducts for school meals, and so far the results are said to be very promising.


“We’re taking into account the low cost, but the high nutritional level” of the products, Toppe said, giving Peruvian anchovies as an example and saying that all parts of the fish are being used to prepare products that are having “very high acceptance in the schools.”


Estefania Bravo, who holds a degree in nutrition from the Catholic University of Ecuador, said that among the lower social strata fish is seen as an expensive product and its byproducts are often used to make soup or broth, although after cooking in this way part of the nutritional value is lost.


“All of the fish is excellent, from the benefits provided by the fatty acids for child development to the lean meat … which is good for reducing weight” and keeping it off, she said.