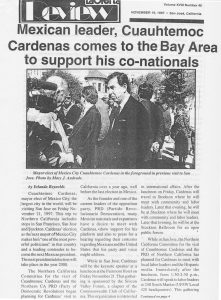 Cuauhtemoc Cardenas, mayor elect of Mexico City, the largest city in the world, will be visiting San Jose on Friday November 21, 1997. This trip toNorthern California includes stops in San Francisco, San Jose and Stockton. Cardenas’ election, as the next mayor of Mexico City makes him “one of the most powerful politicians,” in that country and a leading contender to become the next Mexican president. The next presidential election will take place in the year 2000.

The Northern California Committee for the visit of Cuauhtemoc Cardenas and the Northern CA PRD (Party of Democratic Revolution) began planning for Cardenas’ visit to California over a year ago, well before the last election in Mexico.

As the founder and one of the current leaders of the opposition party, PRD (Partido Revolucionario Democratico), many, Mexican nationals and expatriates have a desire to meet with Cardenas, show support for his platform and also to press for a hearing regarding their concerns regarding Mexicans and the United States that his party and voice might address.

While in San Jose, Cardenas will be the keynote speaker at a luncheon at the Fairmont Hotel on Friday November 21. That gathering is sponsored by the Silicon Valley Forum, a chapter of the Commonwealth Club of California. This organization is interested in international affairs. After the luncheon on Friday, Cardenas will travel to Stockton where he will meet with community and labor leaders. Later that evening, he will be at the Stockton Ballroom for an open public forum.

While in San Jose, the Northern California Committee for the visit of Cuauhtemoc Cardenas and the PRD of Northern California has planned for Cardenas to meet with local labor leaders and the Hispanic media. Immediately after the luncheon, from 1:30-2:30 p.m., Cardenas will speak to labor leaders at 240 South Market (UFSW Local 428 headquarters). This is sponsored by LCLAA (Labor Council for Latin American Advancement).

Among the issues that likely will surface during his visit to San Jose will be such matters as: the desire of the No. CA PRD to expand the Mexican democratic cause to the Mexican community that resides in northern and central California; to realize the actual ability for Mexicans abroad to vote in the next Mexican presidential elections; to improve dialogue between community and political leaders on both sides of the border on issues of mutual concern; such as, economic development, the adherence to human rights and democratic privileges for all Mexicans, including the Zapatistas.

Questions for Cardenas regarding the governance of Mexico City will likely include matters relating to the high incidence of crime in the capital city, the appropriate role, if any, of the Mexican military in reducing crime and the surging incidence of vigilante action by civilians frustrated by the acknowledged corruption within the ranks of the police and the military. Of uppermost interest, for many will be Cardenas role or vision for economic development in the capitol city.

Many people of Mexican heritage live in California and with few exceptions, most Mexican families in the U.S. have been impacted in some way by the events and policies that take place in Mexico. Because of that they remain intensely interested in the comments of the political leadership and other high profile spokespersons from Mexico.

Cuauhtemoc Cardenas was born on May 1 in 1934. He is an engineer by training, having graduated from the National School of Engineering of UNAM (the National Autonomous University of Mexico). His professional involvement has primarily been in land use and utility services planning. His political career began in 1961 as a member of the National Liberation Movement. In 1976 he was elected to the Mexican Senate. Following that four-year term, he served as Governor of the state of Michoacan until 1986. In 1986 he led a group, “Corriente Democratica,” within the PRI but separated from them to become an independent opposition group. Cardenas ran for the presidency, “under the banner of a coalition of several political parties and social movements,” in 1988. He lost the election or, according to many in Mexico, he was cheated of a victory in the election by Carlos Salinas de Gotari. Gotari was disgraced in the last year of his Presidency and now lives in a self-imposed exile in Ireland. In 1991, Cardenas was elected president of the Party of the Democratic Revolution but resigned to run again for the presidency. He was defeated by Ernesto Ponce de Leon Zedillo, a member of the PRI, the party that has controlled Mexico for the last 60 years.

Cardenas is the son of one of Mexico’s most respected president’s, Lazaro Cardenas, who, in 1934, at age 39, was elected President of Mexico. He served in that capacity until 1940. (Mexican presidents are limited to one six-year term.) During his term of office Lazaro Cardenas focused much of his attention toward implementing the promises of the 1910 revolution to the Mexican people that called for agrarian reform (most of the countryside was held by a few very powerful families). He helped the growth of the unions that were labor controlled. Cardenas eventually expropriated both the railroads and the petroleum companies (mostly all owned by foreigners) who balked at the labor reforms he sought on behalf of the workers.

Mayor elect Cuauhtemoc Cardenas, by taking the helm of the leadership for the world’s largest city, will be addressing many problems similar to those that his father sought to correct in the countryside sixty years ago. There is today in Mexico City a great need for decent housing, far more employment opportunities, access a to education and a major reduction of the pollution that is characterized by an unhealthy and heavy smog on most days of the year. Insufﬁcient water, in particular safe drinking water and access to health care for many of the city’s residents are pressing problems among a myriad of others. Many of these issues can not be addressed without the cooperation and support of the nation’s president and the Congress of Mexico.

Imanol Odorika, a Stanford University graduate student and a member of the Northern groups promoting the visits says, “Both Lazaro and Cuauhtemoc Cardenas were oriented to the welfare of the nation’s people.” Then as now, Mexican sovereignty was and is central to their policies. Both sought individual economic development and progress for the nation,” he adds.

San Josean Ben Garza, a U.S. citizen of Mexican ancestry and PRD supporters say of Cardenas’ visit, “I, as many others, am delighted that Cuauhtemoc Cardenas is coming to visit us in the Bay Area.” He explains, “His presence here will surely pick up the political spirit of the Mexican people and the Mexican pro-democracy activists.” He adds, “As an elected official he (Cardenas) also legitimizes even more, our present struggle to implement the voting right for the Mexican people in the U.S. which will allow them to participate in the upcoming presidential elections.”

The Mexican government has agreed that Mexican citizens can vote in presidential elections while living abroad. San Jose’s Mexican Consul, Sergio Casanueva, and other government officials have explained that the logistics necessary to assure a proper vote count are complicated and the process for the vote taking is still being developed. Many Mexicans living abroad are anxious to vote but are concerned that time is running out for that to happen since a proper registration process must be developed for an accurate vote count. There are millions of Mexicans who would be eligible to vote. To accommodate them all at the various consulates, in one day, would likely result in endless lines. That possible scenario is only one of the problems that must be addressed for the vote abroad.

Garza goes on to say that, “As a political figure, Cardenas is the leading contender in the upcoming presidential election. From the point of view of the PRD party organization, Cardenas will help to register new members into the PRD of Northern California.”

Before coming to San Jose, Cardenas will be in San Francisco on Nov. 20 from 10 am. to 11 a.m. at the Victorian Theater at 16th and Mission. Late that afternoon. from 4 p.m. to 6 p.m., Cardenas will be at the Kresge Auditorium on the Stanford University campus.