Puerto Morelos, Mexico, Jul 2 (EFE).- At first Omar Vazquez saw in the brown sargassum seaweed a chance to grow his gardening business, a possibility that began in 2015 when the sea began to dump vast amounts of the algae on beaches of the southeastern Mexican state of Quintana Roo.


At first he used it as fertilizer in his Blue-Green Nursery and sold small amounts to his customers.


At the same time Omar wanted a little adobe house, one that he would build with his own hands on the land of the Blue-Green Nursery, and even designed a smaller one for the “aluxes,” the Mayan spirits, which according to tradition care for the maize crops and the land.


But at a certain point he decided to listen to advice from others and took out all the permits needed to patent the first block of sargassum.


“I used the seaweed as the raw material to make what today is the ‘sargablock,’ the first sargassum building block in the world, patented in 2018,” he said.


It wasn’t long before people interested in replicating the sargassum-house model were getting in touch with Omar Vazquez, people from countries like Belize, Jamaica, Puerto Rico, the Dominican Republic, Barbados, Malaysia and the United States, all hit harder every day by the vast amounts of the seaweed on their shores.


Casa Angelita, as the first sargassum house was named in honor of Vazquez’s mother, is constructed with artisanally made blocks of the seaweed.


“In ideal conditions, it could last with its finishing touches and all for up to 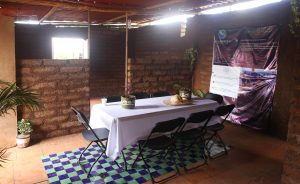 years. Casa Angelita is made of 20 tons of damp sargassum, which when recently gleaned from the beach weighs more,” the builder said.


Vazquez’s construction team has two projects underway at the moment. In one he hopes to have finished 10 houses before the end of the year, which will be donated to poor families.


The other is a private project in Tulum, also on the Mexican Caribbean, where he was asked to build a similar number for a high-class residential district.


Since the seaweed crisis began in the Mexican Caribbean, numerous projects have been launched to take advantage of the algae, from disposable dishes and cups and shoe soles to its use as a fine-foods ingredient and in exotic drinks.


Building houses with sargassum blocks is one of the first seaweed projects to get off to a solid start in the state.


The Blue-Green Nursery now has its first artisanal factory in Mahahual, a tourist town in south Quintana Roo where a dock for cruise ships operates.


Beyond job creation and making use of the encroaching seaweed, which today is seen as one of the big environmental problems facing the region, Omar Vazquez considers it nature’s way of telling us to protect our seas.


“Let us be aware of what is happening on the beaches. The sea is very wise and is telling us something. With the contamination we have created over so many years it tells us to take care, take care of what we have,” he said.