Guatemala City, Jul 6 (EFE).- A bullet penetrated Jose Andres Reyes’ right ribcage and fractured his spinal cord when he was just 13 years old. He was in the street near his home after playing soccer when some gang members confused him and six of his friends with a rival group and sent a hail of gunfire in their direction.


Reyes was the only one who was seriously wounded in the incident. Bedridden for nearly two years, unable to go to school and his hopes shattered, he found a new lease on life thanks to wheelchair basketball.


The 23-year-old, whose first sport after the attack was weightlifting, now uses his strength to play the center position and is demonstrating his level at a wheelchair basketball clinic that the International Committee of the Red Cross (ICRC) is holding in Guatemala City from July 2-9. 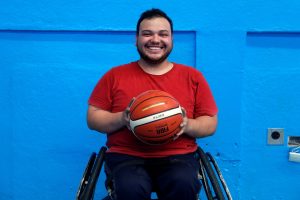 Reyes is one of around a score of players who are motivated to give the best of themselves and learn as much as possible at the camp, which is being led by ICRC sport and inclusion adviser Jess Markt, an American who suffered a severe spinal cord injury in an auto accident and has become a leader in the development of wheelchair basketball in Afghanistan and other countries.


“I hope to be a standout on my team … but the main thing is to do things that we couldn’t or didn’t imagine doing before,” Reyes told EFE.


Just months away from completing his high-school studies via a community radio-based “Teacher at Home” program, Reyes works on his skills with other young people at the ICRC’s camp.


Amid the sound of wheels hitting up against one another, the athletes work on their post-up skills and one-one-one defense before following up with other exercises and trying to take their shooting, passing and teamwork to a higher level.


Angela Dominguez, a 26-year-old veterinary student who has worn a prosthetic device since the age of two due to a rare malformation known as femoral agenesis (congenital short femur) and is one of five women taking part in the clinic, works on her shooting technique under Markt’s guidance, bouncing the ball, pushing her wheelchair toward the basket, placing her elbow at a 45-degree angle and launching her shot toward the rim.


On Tuesday, the final day of the camp, the roughly 20 participants will take part in a tournament aimed at showcasing what they have learned from Markt and the other instructors.


“I had no idea before that adapted sports existed. It was just me and my disability,” a smiling Dominguez told EFE, saying she hopes to use what she learns when she travels with her team next week for a tournament in El Salvador.


The goal of the ICRC, which received backing from Guatemala’s Culture and Sports Ministry for the camp, is to provide a boost to wheelchair basketball in this Central American country and potentially promote the creation of a league and a federation for this sport. EFE-EPA