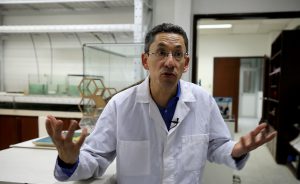 By Christian A. Sanchez

Quito, Jul 8 (EFE).- A scientific laboratory in Ecuador has aimed for 15 years to play a leading role in Latin America with regard to the conservation and research of 70 amphibian species: it is called the Life Raft of the Frogs and shelters more than 1,500 specimens.

This is the oldest amphibian lab in Latin America and has served to help other small projects get started in Peru and Colombia, since the region covered by these three countries – together with Brazil – has the greatest diversity of frogs and toads on the planet.

Santiago Ron, curator of amphibians at the Zoology Museum of the Catholic Pontifical University of Ecuador (PUCE), told EFE that the purpose of the project is “first of all to work for the conservation of species, but also because we are very interested in the research for its own sake.”

The Life Raft was founded in 2005 following the success of a PUCE exhibition that for the first time gave the public an understanding of the diversity of Ecuador’s amphibians, which sparked feelings of admiration and surprise among everyone attending it and led to the creation of this laboratory.

Among the specimens co-existing in this space are the Pacman frogs, the largest in the lab and with a strange morphology that camouflages them in their habitat, and glass frogs, whose males take charge of caring for the eggs.

“Above all, thanks to this project, we’ve learned a lot about the ecology of many species about which we knew nothing, about how they reproduce and feed themselves,” he told EFE while a cricket – a frog’s favorite food – ran up his lab coat. 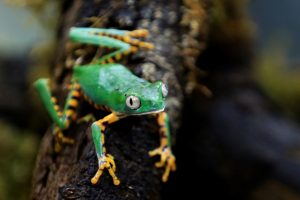 In fact, he laughed, more than once when he went out to have lunch, people would keep looking at him and he didn’t know why: “I asked myself what it could be, and it was because I was walking around with a cricket like a pet on my shoulder.”

Along the narrow corridors clogged with shelves loaded with terrariums, more than 1,500 frogs are kept which display Ecuador’s enormous variety of amphibians, with the different species separated according to their natural habitats: the largest come from the Amazon region and coastal lowlands, while the smallest live up in the Andes.

Notable among them is the waxy monkey tree frog, a brightly colored batrachian with an active nightlife, and the Jambato toad, believed to be extinct until 2016 when researchers managed to locate specimens that are now being analyzed and preserved at the Life Raft.

“What Life Raft of the Frogs does generates top-class science and research,” Ron said proudly.

The Life Raft is also an example for many other projects around the world, since it has become “one of the largest programs for the conservation and research of frogs, not only in Ecuador but also in Latin America and the world,” Ron said.

Thanks to conferences and workshops given at the laboratory and the training that some scientists have received there who now have their own research centers, this project has expanded and plays “a very important role” in educating the region on the subject.