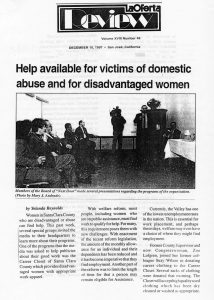 Women in Santa Clara County who are disadvantaged or abuse can ﬁnd help. This past week, several special groups invited the media to their headquarters to learn more about their programs. One of the programs that the media was asked to help publicize, about their good work was the Career Closet of Santa Clara County which provides disadvantaged women with appropriate work apparel.

With welfare reform, most people, including women who are on public assistance, must find work to qualify for help. For many, this requirement poses them with new challenges. With enactment of the recent reform legislation, the amount of the monthly allowance for an individual and their dependents has been reduced and it has become imperative that they find employment. Another part of the reform was to limit the length of time for that a person may remain eligible for Assistance.

Currently, the Valley has one of the lowest unemployment rates in the nation. This is essential for work placement, and perhaps these days, welfare may even have a choice of where they might find employment.

Former County Supervisor and now Congresswoman, Zoe Lofgren, joined her former colleague Suzy Wilson in donating career clothing to the Career Closet. Several racks of clothing were donated that morning. The Closet will accept high quality used clothing which has been dry cleaned or washed as appropriate.

The racks of handsome stylish clothing gave evidence that, as what stated in the Wednesday press release, “the member of WIPP (Women in Private Sector Public Policy) and women public officials had cleaned out their closets to help low income women prepare the proper attire for job interview.”

Proper attire for work, in particular the apparel work for a job interview, along with a good resume and attitude is essential for a successful interview. Career Closet volunteers work very closely with Second Chance another organization dedicated to helping women develop their skills, learn how to write a good resume and how to interview for a job. Dressing well and knowing that one looks well-dressed is important. Congresswoman Lofgren says, “through this effort we hope to help provide economically disadvantaged women with not only the clothing but the confidence needed to do well in an interview.”

Besides the resume, employers tend to rely on the appearance of an individual who is applying for work in the hope that the applicant will have the same conﬁdence in the workplace as they have in their appearance. For first time workers, employers have little else with which to evaluate a person. A person who feels good in the way they look is expected to have a similar pride in their work product and thus are seen as a desirable employee.

A number of corporations help the Career Closet. For example, Cisco Systems offers an incentive to encourage contributions to the Closet. They donate money in proportion to the donations of clothing made by their women employees. This money is needed for such personal items as underclothing, haircuts, etc. Andrea Liederman, of the public relations staff at Kaiser Permanent Santa Clara, said she along with all of her female colleagues in that department donated clothing to the Closet last week.

Suzy Wilson pointed out that Career Closet is located in the Princeton Plaza Mall by the Goodwill of the shopping center owner, Don Perrucci. She explained that he had set only one requirement for them. That was that the Career Closet appear as any other store in the center. The shop has the appearance of a rather upscale women’s apparel shop.

On Wednesday as well, another very important program, Next Door, held a gathering of the ‘Hispanic media in order to inform their respective patrons of their community work. This program, whose full name is ‘Next Door Solutions To Domestic Violence,’ is a very important service that provides women in abusive relationships with a place of refuge and with help in dealing with their situation. Some women are able to get help for themselves and the abuser and eventually return home, but some, need much, much more help.

For some women, it is imperative that they take more drastic action and ﬁnd a way to live independent of the abuser. What Next Door seeks is a reduction it) the “incidence and recurrence of domestic violence through education and advocacy.”

Ralph Torres, Chairman of the Board of Next Door Solutions and a member of the San Jose Police Department, stated that, although the statistics in Santa Clara County indicate crime is down, the incidence of domestic abuse is up by 60%. A Latino Task Force was established to help reduce these figures by letting women know that victims of domestic abuse can find help in this community and that their problems, most often, are not their own fault but rather the problem of the abuser, who frequently is a signiﬁcant male in the women’s life. Forty percent of the abused women in this county are Latina.

Captain Torres said that officials are not exactly sure what caused the increase in domestic abuse but he feels that it may be partly due to the well-publicized death of Nicole Simpson who it was revealed in the trial, had been physically abused by her husband O.J. This caused or increased awareness of the problem.

Alcohol and drugs contribute greatly to spousal abuse, and often, child abuse as well. Torres explained that 90% of the people (male or female) who use methamphetamine are abusers.

If it is not ended, domestic abuse has serious and long lasting consequences to the abused members of the household. Flor Sanchez, the Executive Director of Next Door, explained that people who have not been trained to solve their problems and differences with others except by using physical force will, in turn, use similar behavior toward other people.

Torres explained that, in the United States, every 9 seconds a woman is abused and that every 6 hours a woman 15 killed by her husband, boyfriend or partner. Just this last week, a woman in a north bay community was found murdered, allegedly by the father of her child. The child was found wandering alone in a parking lot near San Francisco. This alerted law enforcement officials to search for the child’s mother.

Since abusive behavior towards another person often escalates, it is important that those who are abused seek help. But it is equally important that the help they get is well trained to give help because one of the most dangerous times for the abused person is when they try to leave that relationship.

Next Door was created to provide a preliminary one stop center for victims of domestic violence. For example, a victim can seek assistance here in obtaining legal services which are essential for seriously abusive situations, such as restraining orders or information on divorce. Besides the short term 24-hour shelter provided by Next Door, provision may be made for longer term transitional housing lasting 30 days. Each month Next Door’s shelter provides conﬁdential, safe housing for an average of 25 individuals and local battered women’s shelters and homes provide safe housing for up to another 82 women and children.

For those people who must move away from violence at home there is also help in finding permanent housing and the skills necessary to live apart. Next Door works closely with other services in the community as a way to reduce duplication and to efﬁciently assist those who have the array of needs common in domestic abuse situations.

Santa Clara County officials, including the Police department and the District Attorney’s office, have taken an aggressive and progressive stance in the effort to reduce domestic abuse. They point out that behaviors common to domestic abuse are: coercion and threats, intimidation, emotional abuse, isolation, minimizing, denying and blaming, using children, using economic abuse, and the assertion of male privilege.

To avert such abusive behavior among teens, Next Door also provides services for dating teens. It is named the D.A.T.E. (Dating Abuse Teen Education) program. Some young people confuse abusive date behavior with an all-consuming “love” of their date which can ultimately be life threatening.

Next Door has an outreach program that is intended to increase teen awareness of date abuse by visits to high schools and to talk to the youth.

It is imperative that the entire community become aware of the reality of domestic violence. Mr. Torres stated – that domestic violence is crime and that if a person witnesses such behavior they should alert the police, in particular if someone seems in danger of physical injury. If you know of someone who is abused and afraid to seek help direct them to Next Door. Their services are confidential, as is the location of the shelter in which the women or a mother and her children can find refuge until they can safely be on their own.

To understand the extent of domestic abuse in the County, one must know that, between July of 1996 and June of 1997 alone, there were approximately 8,000 incidents of such abuse. Women make up 94% of those victims. In 1996 there were 8 deaths attributed to domestic abuse in this county. In the United States, it is estimated that 3.3 to 10 million children witness acts of violence each year. According to reports, “these children are going to be 6 times more likely to attempt suicide and are 50% more likely to abuse drugs and alcohol.”

Next Door provides 24-hour emergency shelter, including counseling for the battered woman and her children. Calls can be made to the center in either Spanish or English on an emergency hotline available 24 hours a day. The number is 270-2062. All services at the Next Door are available in Spanish. Materials and information are available in Korean and Vietnamese as well.