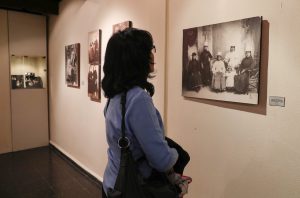 La Paz, Jul 12 (efe-epa).- Finely embroidered blouses and shawls together with layered skirts and boots, fashioned lately but inspired by other times, form part of a display in La Paz that makes it clear that Bolivia’s indigenous Aymara women are more in style than ever.


Twelve of their outfits are included in the display, which begins this Friday at the Costumbrista Museum in La Paz, the institution’s director, Monica Sejas, told EFE.


Every year the museum puts on an expo dedicated to the Aymara girls, known as “cholitas,” stars of its collection of photos from 1925 to the present, as well as to items of clothing from times gone by that are part of its heritage.


The novelty this year are 12 new outfits donated by Mabel Cruz Romano, who had them made in recent years to dance the “morenada,” a typical Bolivian dance, with the group “Fanatics of Great Power,” Sejas said.


The inspiration for these fashions was the clothing of Aymara women between the late 19th century and the beginning of the 20th.


A happy coincidence was found between a 1925 photo, which shows an Aymara girl wearing an outfit of delicate lace and vertically striped blouse and skirt, and a very similar sky-blue fashion donated by Cruz. 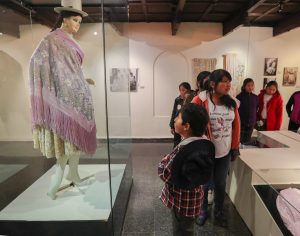 Another of the new outfits is dark green like velvet with fine white lace cuffs and decorations on the upper part of the skirt.


Beside it is a blue outfit with yellow decorations and a shawl, while another that stands out is red with a black blouse and boots.


Every outfit is complemented with lace petticoats that fit underneath the skirts, and with the elegant fedora or derby hat that a cholita cannot lack.


The museum has a permanent gallery dedicated to the Aymara women of La Paz, which reveals that in the 16th century Inca ladies in Qullasuyu, the ancient territory of the Altiplano, wore the “aqsu,” a garment that covered them from shoulders to ankles and were fastened with “tupus” or pins.


Around the waist they wore a “chumpi” or sash and on their shoulders a “lliqlla,” a kind of shawl.


During the colonial era, Viceroy Francisco de Toledo banned the use of Inca garb and ordered people to wear clothing typical of the mountains in Spain.
“The chiefs and their families were the first to adopt Spanish clothing,” according to the museum. 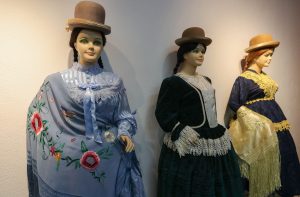 Gaining popularity in the 17th century were petticoats, which were adopted by the Bolivian cholitas along with the traditional shawl of Madrid, garments that today are an essential part of the Aymara girls’ traditional dress.


The cholitas’ wardrobe has undergone changes over the years, with the change of the white “jipijapa” hats (palm-leaf hats) for the current derbies, and boots for flat slippers, Sejas said.


Furthermore, the shawls used to be embroidered but now “they’re made of silk and are much more elaborate.”


Though such changes are there to be seen, it is also evident that the fashions of long ago are returning, since “sleek cloth is being pretty much left aside” in a return to heavy textiles.


“What can be seen in this display is that the elegance of the La Paz lady has not gone out of style, but every year gets stronger and more prevalent in our society,” Sejas said.