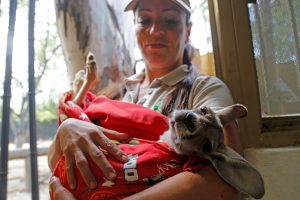 Guadalajara, Mexico, Jul 14 (efe-epa).- Khya, an eight-month-old red kangaroo, is being raised by humans inside an artificial pouch at the Guadalajara Zoo in western Mexico after her mother died of heart problems three months ago.


Veterinarian Alma Ortega has been Khya’s “substitute mother” for the past 10 weeks, a task that has taken up about 12 hours each day and means carrying the young ‘roo around in a sack to make her feel safe and protected.


“There are two things that represent safety to her: Her pouch and me. So she can be with me but outside her pouch, but if I put her into (a pouch) and she’s afraid it doesn’t matter who’s with her. What she needs is the protection of her first skin,” namely that artificial sack that has replaced her mother’s pouch, said the director of the zoo’s “Australian Village.”


Ania, Khya’s mother, died suddenly in captivity in May. A few days before her death, she stopped caring for her “joey” – as baby kangaroos are called – and went away to die alone in one of the zoo areas where she lived with other kangaroos.


Veterinarians at the facility took over feeding and caring for Khya to make sure she develops as normally as possible. Without that care, she would have died or had growth problems, since female kangaroos never adopt babies that are not their own, Ortega said. 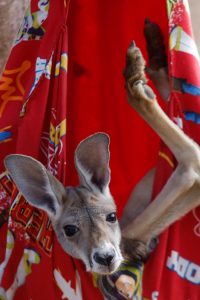 “There are very loving mothers, but it’s not that way with other babies. The mother kangaroo always has a baby, in her two uteruses, in her pouch and on the outside and that makes it difficult for a mother to adopt another baby, even if a kangaroo by mistake gets into the wrong pouch. That mother’s going to react aggressively and will swat it, and even bite it to get it to go away,” she said.


Ortega began acting as Khya’s mother from the very first. She plays with her, pampers her, caresses her, encourages her to jump, to interact with the other kangaroos, she stays close to her and, above all, is her protector when the little ‘roo feels insecure, nervous or wants to sleep.


When the joey became an orphan she was five-and-a-half months old, the equivalent of a six-month-old human baby who has to be taught how to do everything. Being left without a mother midway through her rearing left Khya feeling insecure and vulnerable, and so the zoo vets consider her to be almost a premature baby.


So, when Khya jumps farther than before, or lets the other baby kangaroos approach her or urinates on her own, her human mother hails the event as if it were her own achievement.


She sees to whatever the baby needs, always has the pouch with her for Khya to crawl into and holds her in her arms. If the joey is afraid, Ortega knows that she must hug her just like a kangaroo mother would do.


Besides following the instructions in a kangaroo-raising manual, Ortega has learned from the other kangaroo mothers in the Australian Village how they look after their own babies and “educate” them, applying those same techniques to Khya. 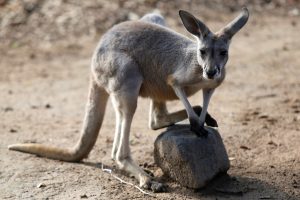 “It means a lot of sacrifice because it takes up all your time and all your thinking. (Her routine) is very changeable and there’s always something new, sometimes big advances, sometimes small ones. Raising her is a day-by-day process, and we can’t lose hope. We can’t pretend that she’ll grow up like a kangaroo with her (real) mother,” she said.


Although Khya and Ortega have bonded, the vet knows that there will come a time in a few weeks when her ward will leave her side and become independent, and then Khya will interact virtually exclusively with the other kangaroos and will sleep on the ground with them rather than in the artificial pouch.


“She already doesn’t fit into her pouch, but she keeps trying to get in, she’s going to be feeling so uncomfortable (soon) that she’s going to be forced to be on the ground. She’s not there yet, but she’s already spending lots of time with her fellow kangaroos. She’s doing it because we’re her protection, but instinct is instinct and she’s going to figure out how to be a kangaroo,” Ortega said.