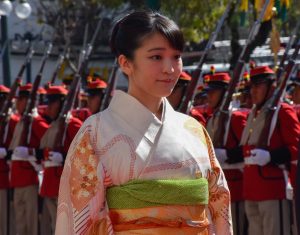 La Paz, Jul 15 (EFE).- Princess Mako of Japan thanked Bolivia this Monday for the welcome it has extended over the past 120 years to Japanese migrants and their descendants, at the start of her state visit to the Andean country.


“I would like to repeat our deepest gratitude to the government of Bolivia and to all the Bolivian people for having so warmly welcomed Japanese immigrants,” said the princess, accompanied by Bolivian President Evo Morales.


The eldest niece of Japanese Emperor Naruhito began her visit to Bolivia with a ceremony in Murillo Plaza in La Paz, where she presided, together with Bolivian Foreign Minister Diego Pary, over a the laying of a floral wreath at the mausoleum of Marshal Andres de Santa Cruz, an outstanding figure in this nation’s history.


Wearing a peach-colored kimono, she attended the reception offered by President Morales at Bolivia’s seat of government, where in her speech she at one point addressed the nearly 13,000 citizens of Japanese descent living in Bolivia, known as nikkei.


The princess, 28, recalled that the Japanese presence in Bolivia has reached its sixth generation in regions like Beni and Pando, where the largest concentrations are to be found of descendants of the first Japanese who came to this country in 1899.


Mako of Akishino expressed her pride that those first 91 immigrants and their descendants “have contributed to the development of Bolivia and have been a bridge between the two countries, overcoming numerous difficulties” in the course of these 120 years, to win “the complete trust of Bolivian society.”


The speech ended with a hope that friendly relations between both countries “will last forever” and a “muchas gracias” in Spanish.
Evo Morales received the princess with a greeting to all the people of Japan, a country notable for forgiving Bolivia $500 million in foreign debt and for granting a credit for another $550 million to invest in energy projects.


Morales presented several gifts to the princess including a bust of the indigenous heroine Bartolina Sisa, so that “you never forget Bolivia,” and several books, to which she responded with the gift of an exquisite Japanese vase.


The elder daughter of Prince Fumihito, brother and heir of the emperor of Japan, was scheduled to continue her day at La Paz City Hall, where she would receive the keys to the city, and afterwards ride a cable car to the Japanese Garden of the Andean city.


Her visit will continue this week with activities in La Paz and Santa Cruz, the latter a Bolivian region with significant Japanese settlements.


The princess landed at the airport at El Alto, a city neighboring La Paz, on a flight from Peru, where she also commemorated the arrival of Japanese immigrants more than a century ago to fill the need for a labor force. From there they expanded into Bolivia.