Sao Paulo, Jul 17 (efe-epa).- Forty years ago, the accidental discovery of a gold nugget in Brazil led to the opening the world’s largest open-air mine.

In Serra Pelada, in the heart of the Amazon, photographer Sebastiao Salgado photographed the huge mass of men blinded by the gold fever that devastated part of the jungle.


The mine in the interior of Brazil’s northern Para state became part of history during the 1980s thanks largely to the lens of Salgado, who is also known for his works titled “Genesis” and “Exodus.”


Forty years after the deposit began to be exploited, the photographer is recalling one of his most impactful works with the “Serra Pelada Gold Mine” exposition, which will open to the public on Wednesday at Sao Paulo’s SESC center.

Salgado has gathered together a portion of his many photos for the exhibit, but he is also placing on display never-before-shown black and white photos he took at the mine in 1986.


In those photos, he immortalized the ravages wrought by the rampant desire for gold that brought some 50,000 desperate men together in subhuman conditions to mine for the yellow metal.


“You only heard the sound of the shovels and the murmur of the workers. I had the impression that I was listening to the murmur of the gold in the souls of those people,” Salgado, 75, recalled in an interview with EFE.


The images of thousands of men going up and down into the mining pit on the rickety wooden stairs were first shown outside Brazil during the 1980s and helped to redefine photojournalism by marking the return of black and white imagery to newspapers and magazines.


That is what Lelia Wanick Salgado, the photographer’s wife and the curator of the exhibit, said of the exposition that gathers fragments of the lives of the thousands of men from different social classes who risked everything hoping to strike it rich.


Some achieved their dream but most ultimately left the site just as poor as they had been on the day they arrived.


“It seemed like slavery, but it wasn’t at all. The people were there because they wanted to be, thinking that they were going to become rich and that is the explanation of the human being, of what the human being is,” Wanick told EFE.


For several weeks, Salgado took photos inside the Serra Pelada mine to capture the day-to-day existence of the workers thirsty for wealth, exhausted and covered from head to toe with mud and sweat.


The tireless search for gold transformed a hill covered with vegetation into a huge crater 200 meters (656 feet) wide and deep divided into parcels of 2×3 meters (about 65 square feet). 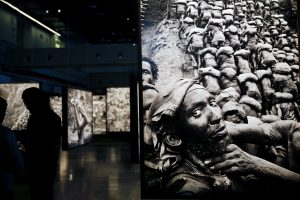 There, Salgado got a real taste of what the class struggle means, as he portrayed in one of his iconic photos.


In that image is a worker covered with mud, with a herculean build, grabbing onto the barrel of the rifle held by a defiant police officer somewhat shorter than he, the pair surrounded by hundreds of partially clothed miners.


“I saw serious conflicts, represented in some photos … of that latent class struggle. Serra Pelada is something that I’ll never see again in my life and I’ve been all over the planet. It’s been almost (40) years since I made (those) photos and I’ve been to more than 130 countries, but I only saw that strength, that power and that emotion at Serra Pelada,” the photographer said.


At the beginning of the 1990s the rains and the height of the water in the region were pushing the miners to other parts of the Amazon jungle, where illegal mining continues … especially on the lands of the indigenous Yanoamami tribe.


Today, Serra Pelada is – in Wanick’s words – a “lake with lost dreams hidden beneath its placid surface.”