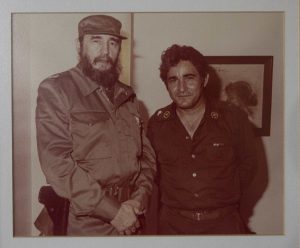 Managua, Jul 18 (EFE).- The Nicaraguan revolution was steered off course by one-time Sandinista leaders who have become dissidents, the legendary “Commander Zero,” Eden Pastora, told EFE in an interview coinciding with the 40th anniversary of the toppling of the decades-old Somoza dictatorship.

Pastora said the survival of the revolution now depends on the leadership of 73-year-old leftist President Daniel Ortega, a former rebel commander who was re-elected in late 2006 for a second stint as head of state.

A legendary former guerrilla who was known as “Comandante Cero” (Commander Zero), Pastora led a Sandinista commando unit that seized the National Palace on Aug. 22, 1978, nearly a year before the definitive defeat of Anastasio Somoza DeBayle on July 19, 1979.

That action, in which the commandos held hostage lawmakers allied with the then-dictator, lasted three days and ended with the release of dozens of political prisoners.

Q: What were the main motivating factors that led to the triumph of the Sandinista revolution 40 years ago?

A: American meddling has caused us Nicaraguans lots of problems … the Knox Note that removed liberal revolutionary Jose Santos Zelaya from power (in 1909), three invasions of Nicaragua by the US Army, in one of which they killed Benjamin Zeledon (a national hero).

They gave the San Andres (archipelago) to Colombia, and then in the last (US) invasion (Augusto C.) Sandino, the general of free men … defeated the US Army over seven years of guerrilla warfare.

The gringos (Americans) never forgave Sandino and left us with the National Guard, which was nothing more than an invading army with an Indian face, and left the Somozas in power for 45 years in exchange for them killing Sandino. And the gringos supported this dictatorship, the cruelest in Latin America. That really was a dictatorship. 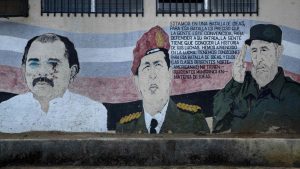 Sandino showed us a nationalist, patriotic, revolutionary, social justice-oriented, anti-imperialist way and charted that path to freedom and democracy.
Carlos Fonseca (the founder of the Sandinista National Liberation Front, or FSLN, socialist political party) showed us the way and now Daniel Ortega is leading us along that path that Sandino charted.

Q: What events paved the way for the fall of the Somoza dictatorship?

A: I think the last straw was the killing of Pedro Joaquin Chamorro (an anti-Somoza journalist slain on Jan. 10, 1978), when the Sandinista Front, the vanguard, had set the prairie ablaze.

And the prairie was burning. That was when they killed Pedro Joaquin Chamorro. The flames were fanned and that was the fulminating spark, the detonator.

A: Ah, that was what made it an international political matter, because the United States saw that they’d killed Pedro Joaquin, that they were killing us, and the empire shrugged their shoulders. But it only took one of their citizens being killed for that to change and for the United States to remove their support. With that, neither Jimmy Carter nor anyone could defend Somoza and told him to get out.

Q: What role did the Cuban revolution and its leader Fidel Castro play in the triumph of the Sandinista revolution?

A: It wasn’t that much, despite what many think … until they saw the real possibility of victory. Then the aid (they offered) was substantial, crucial. Without that assistance, who knows if we’d have been able to overcome the dictatorship.

The Cubans were surprised when they saw that we were defeating Somoza and that our victory was a reality.

Q: What in your judgement were the main successes and failures of the Sandinista revolution during the 1979-1990 administration?

A: The three principals (“commanders”) who derailed the revolution were Jaime Wheelock, in charge of agrarian reform; Henry Ruiz, responsible for (economic) planning; and Luis Carrion, head of security for the revolutionary state. Those three were the ones who got the revolution off track in the 1980s.

You have to understand that we didn’t have a presidential government, but rather there was a collegial command and that Daniel wasn’t the president. Who was Daniel? He was the spokesman of the revolution who made an effort to justify or defend the mistakes (of the other commanders, now dissidents).

Q: How do you explain the exodus of those who made the revolution possible?

A: We’re talking about Dora Maria Tellez, Hugo Torres, Victor Hugo Tinoco and 10, 15, 20 others. So when the people condemned them and the people voted against them in 1990, they thought the FSLN would never regain power. So they left the FSLN. 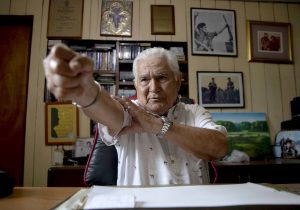 Sergio Ramirez and all of them throw up their hands and say it wasn’t me. Vice President Ramirez, who in practice was Daniel’s No. 2.

Q: You also distanced yourself from the revolution in the 1980s, were a counter-revolutionary and came back to the FSLN when Ortega regained power in 2007.

… But these (individuals), when they were in power … squandered the most beautiful of all revolutions, and in (the) 1990 elections the people punished them.

Q: July 19 marks the 40th anniversary of the Sandinista revolution. What remains of Sandinism?

A: Everything. It’s fully intact. The 42 social projects are Sandinista. Our anti-imperialism … We’re anti-imperialists. The social struggle remains. Social justice. What Sandino taught us remains, and that’s why this people kept the commander (Ortega) in office when they wanted to carry out this coup.

The Front is indestructible. It’s a well-organized party, with ideological foundations, with social pillars. And this 40th anniversary guarantees us the 50th anniversary, the 60th and the first centenary.

Q: What will come of the FSLN and its revolution after Daniel Ortega?

A: If by God’s will Daniel Ortega were to die tomorrow, I think 10 MRSs (the dissident Sandinista Renovation Movement) would sprout up. We screw up everything here, and that’s why we ask God to keep him with us. EFE-EPA