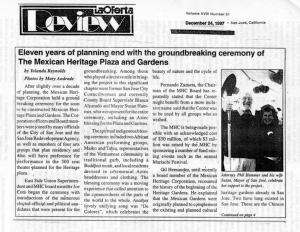 After slightly over a decade of planning, the Mexican Heritage Corporation held a ground breaking ceremony for the soon to be constructed Mexican Heritage Plaza and Gardens. The Corporation officers and Board members were joined by many officials of the City of San Jose and the San Jose Redevelopment Agency, as well as members of four arts groups that plan residency and who will have preference for performance in the 500-seat theater planned for the Heritage plaza.

East Side Union Superintendent and MHC board member Joe Coto began the ceremony with introductions of the numerous elected official and political candidates that were present for the groundbreaking. Among those who played a decisive role in bringing the project to this signiﬁcant chapter were former San Jose City Councilwoman and currently County Board Supervisor Blanca Alvarado and Mayor Susan Hammer, who were present for the entire ceremony, including an Aztec blessing for the Plaza and Gardens.

The spiritual indigenous blessing ceremony included two African American performing groups, Maiko and Tabia, representatives of the Vietnamese community in traditional garb, including a Buddhist monk, and local residents dressed in ceremonial Aztec headdresses and clothing. The blessing ceremony was a moving experience that called attention to the connectedness of the parts of the world to the whole. Another lovely unifying song was “De Colores”, which celebrates the beauty of nature and the cycle of life.

Fernando Zazueta, the Chairman of the MHC Board has repeatedly stated that the Center might benefit from a more inclusive name said that the Center was to be used by all groups whose wished.

The MHC is being made possible with an acknowledged cost of $30 million, of which $3 million was raised by the MHC by sponsoring A number of fund raising events such as the annual Mariachi Festival.

Gil Hernandez, until recently a board member of the Mexican Heritage Corporation, recounted the history of the beginning of the Heritage Gardens. He explained that the Mexican Gardens were originally planned to complement the existing and planned cultural heritage gardens already in San Jose. Two have long existed in San Jose. There are the Chinese Cultural Garden at Overfelt Botanical Gardens, located at McKee Rd., and the Japanese Friendship Gardens in Kelly Park off of Senter Rd. Some add the 2.5-acre San Jose Rose Garden and, more recently, the Heritage Rose Garden which might more appropriately serve as a reminder of the agricultural and gardening past of when Santa Clara Valley was known as the “Valley of Hearts Delight.”

Very quickly the Mexican Heritage Gardens grew from a garden park, expected to cost $3 million, into a major project budgeted for $30 million. The added expense is primarily due to the cost of building a 33,000-square foot cultural center, “which will feature a state-of- the art 500 seat performing arts theater, rehearsal areas, gallery, multipurpose room, a plaza, three gardens, classrooms, offices and over 10,000 square feet of retail space.” This phase of the project, which will occupy 6 acres of the site at the corner of Alum Rock Ave. and King Rd. is expected to be completed by the spring of 1999.

This cultural center will add a second major Mexican heritage cultural center to the Bay Area. In San Francisco, the 22 year old Mexican Museum (MM) is expected to be relocated to its own building in the year 2000 after an expected 1998 groundbreaking.

This new six story, 55,000 sq. ft., $15 million building will be located at Yerba Buena Gardens, an area in which the San Francisco Museum of Modern Art, Moscone Center and the Center for the Performing Arts are located.

The Mexican Museum has already been allocated $7.5 million in SF Redevelopment Agency funds for its construction. The Museum is to match that amount. According to Maricela Martinez of the Mexican Museum, the funding goal of another $7.5 has almost been achieved. The fund raising received a major boost from a $2 million donation by a couple in Woodside who are patrons of Mexican art. The MM organization also had its share of controversy that has since been resolved.

The Museum currently has in its collection, “9,000 works of pre-Columbian, colonial and folk art and contemporary and Chicano Art.” Besides this impressive collection of art for display, the museum will have a large multi-purpose area. One ﬂoor of the museum structure will be dedicated to classrooms, another two ﬂoors are for “ﬂexible exhibition use” and there will be increased space for the ‘La Tienda’ gift shop and the cafe.

San Francisco artist Peter Rodriguez is credited with founding the Mexican Museum in 1975. Until 1982, the MM was located in San Francisco’s Mission District. It then moved to Fort Mason where it will remain until the Museum building is completed in the year 2000. The architect for the soon to be built Mexican Museum is Ricardo Legoretta, who designed the Tech Museum of Innovation in downtown San Jose.

In a flurry of enthusiasm, at Saturday’s dedication, it was announced that the Mexican Heritage Plaza and Gardens was a first in the United States. However, viewed as a cultural center, it will not be a first since San Antonio, Texas had also its groundbreaking on December 12. A Hispanic Cultural Center is also planned for Alburqueque N.M. and will break ground in the near future. Robert Ortega of that city was at the Saturday dedication, sharing in brotherhood and mutual support a beautifully painted gourd for display in the Mexican Heritage Garden and Plaza Center.

Councilman Manny Diaz in recognition of Supervisor Alvarado’s persistent efforts for the cultural center, suggested that Mexican Heritage Cultural Center be renamed in her honor.

As has been pointed out by other media the San Jose Mexican Heritage Plaza and Gardens has not come about without controversy since its inception. Some of that controversy was evident as a group of San Joseans, mostly neighboring residents, paced in protest of the feared use of alcohol at functions at the cultural center.

The protesters, represented a number of organizations such as: Mothers Against Drunk Driving, ARAC East San Jose, San Jose State MECHa members, National Alcohol and Drug Dependency,  Our Lady of Guadelupe, PACT, Mano a Mano and ACORN which have begun an aggressive attempt to educate the community regarding the problems that are created by the excessive use of alcohol and to reduce the excessive number of liquor outlets in the area of San Jose. The targeting of Latinos and, in particular, Latino youth for the sale of alcohol by the liquor industry has been well documented and remains a serious problem.

Pascual Mendivil, a native San Josean said, regarding the MHPG, “I would hope that they will maintain a total ban on alcohol for all events.” He adds, “It needs to be pointed out that contrary to some media reports, it (the sale of alcohol) is not a done deal that alcohol will be served.” He explains, “I think the issue of alcohol at the Centro should be decided by the community as a whole.” He adds, “The community will not compromise on alternatives to a total ban of alcohol at the center.” He explained. “we do know a ban works – when alcohol was not allowed at Our Lady of Guadalupe Church gatherings the fights and problems ended.”

Felix Alvarez and representatives of the various organizations that have taken a similar stand for a ban on alcohol at the new center recently, met with the Mexican Heritage Corporation Board membership seeking information regarding their concerns. According to MHC President Peter Carrillo, an ad hoc committee was formed to arrive at a policy recommendation for the entire MHC Board to consider in addressing the issue of an alcohol policy with respect to the Cultural Heritage Center itself.” He said that he expects that they will complete their work by January or, at the latest, for the February board meeting. The members of the ad hoc committee are, Chairman Jose Villareal, Tom Estrada, Susan Fraser O’Connor, and Don Perez.

Board Chairman Fernando Zazueta stated that, if it was his decision alone he “would support the alcohol use at the Center.” He explained, “We need to show our children that we can be responsible in drinking.” He added, “Wine is no different to milk or water- in fact, La Oferta has had gatherings where wine has been served, why should it be different at the MHPG”. (As of last year, La Oferta Review, a privately owned corporation, no longer serves alcoholic beverages at its social and cultural events). Zazueta said that the matter of the sale of alcohol will not be that of the MHC Board alone but that the city will have input on this issue.

The Mexican Heritage Plaza and Gardens will provide increased space for the community to celebrate the arts and other community and cultural events. The Mexican Consul, Sergio Casanueva, eloquently praised the City and the peoples of this great nation and expressed pleasure that “Joseﬁnos and residents of the Silicon Valley will have another home for the presentation of Mexican tradition, culture, and art.” He also gave special thanks to the leaders of the City, the Redevelopment Agency and, in particular, special thanks to the taxpayers of the City who have made the cultural center a reality.